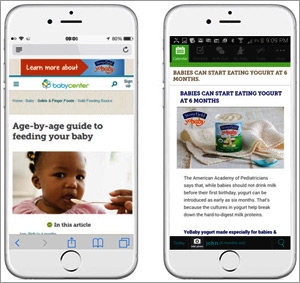 For marketers of kids' products, the perennial challenge is that the window of consumption and sales opportunity — particularly with babies and toddlers — is fleeting.

And for food makers, products of course need to be nutritionally appropriate for developmental stages.

For those and other reasons, it's critical for organic yogurt maker Stonyfield to reach mothers precisely at specific points in children's development to convey messages about its YoBaby, YoToddler and YoKids brands, Pete Lewis, senior director of marketing, tells Marketing Daily.

Lewis reports that Stonyfield is launching a year-long digital campaign with pregnancy and parenting media destination BabyCenter to connect with moms with targeted outreach and online messaging at four different developmental stages. Platforms being employed include email, video pre-roll, branded content, mobile media, milestone-targeted virtual events, and apps and contests that will roll out later in the year.

This is an expansion of a partnership: Stonyfield had already been using Johnson & Johnson-owned BabyCenter because of its reach (70% of new U.S. mothers) and trust quotient among moms, as well as its active community and content written by its own editors and expert contributors, says Lewis. BabyCenter uses due dates and birth dates provided by its users to offer the milestone-targeted marketing opportunities.

Stonyfield will, for example, reach moms when their babies turn six months, to convey that pediatricians say that babies can begin consuming yogurt as early as six months, says Lewis. (A common misperception is that yogurt, like cow's milk, shouldn't be consumed until 12 months of age, he notes.)

In addition, Stonyfield wants moms to understand that its YoBaby and YoTot lines are whole-milk yogurts — pediatricians recommend whole milk because about half of children's calories should come from fat during the first two years — and, of course, to convey the benefits of choosing its organic yogurts for babies and kids.

Stonyfield will also reach out to moms whose babies are reaching nine months (when mom can begin introducing more diversity in the child's diet), at one year (when nutritional needs make it appropriate to graduate to YoToddler) and at 24 months (when it's time to graduate to low-fat YoKids).

Stonyfield, which is majority-owned by Danone Group, is feeling urgency to capitalize on another window of opportunity: moms' rapidly growing preference for feeding organics to their children.

More than a third (36%) of U.S. Millennial moms now report that they regularly buy organic foods and beverages for their children, according to a new study on the roles of mobile and media in moms' lives from the Interactive Advertising Bureau and BabyCenter.

"If there's any consumer group where purchasing organic is almost the norm, it's new mothers," sums up Lewis.

While Stonyfield claims world leadership in overall organic yogurt sales, and has been making YoBaby for 16 years (and YoKids and YoToddler since 2005 and 2009, respectively), one of the challenges for all kids' yogurt brands is the common practice of feeding regular yogurt to kids.

Total kids' yogurt sales in the U.S. actually declined 1.3% in the year ended December 28, 2014. However, sales of YoBaby, YoToddler and YoKids combined grew by 29.6%, and their combined share of the kids' yogurt segment grew to 14.3% from 10.9%, according to IRI data from Stonyfield.

Still, there are a number of organic baby and toddler yogurt brands out there (including Plum Organics, Earth's Best, Happy Baby/Happy Tot) as well as nonorganic kids' lines (including Dannon's own Danimals and new Greek lines from Chobani), not to mention the plethora of brands formulated with adults in mind.

Lewis reports that currently, only 20% of kids under two years of age are consuming YoBaby or YoToddler. "That represents a very big opportunity for us," he stresses.

One key is reaching moms through mobile — BabyCenter's mobile platforms are a major draw for the brand, Lewis says. Fully 90% of U.S. moms now own smartphones, and the percentages are even higher in countries including China and the U.K., according to the IAB/BabyCenter study.