Consumers Have Less Than $20 In Cash In Pocket, Want Drone Deliveries 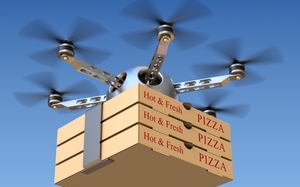 As American consumers grow more reliant on e-commerce, they’re also increasingly open-minded about innovations: A new survey reports that 66% expect to have a package delivered by drones in the next five years, for example. And cash continues to lose its clout. While 56% say cash is the most secure way to pay for things, only 11% had paid for something in cash in the past day, down from 27%, in the same survey a year ago. And 59% of those in the poll had $20 or less in their wallets.

The new Future of Retail Study, from Walker Sands, a Chicago-based PR agency, included 1,400 U.S. online consumers, and finds that people are continue to shop more online, with 28% saying they do so at least once a week. (That’s up 27% from last year.) And 68% do so monthly, compared to 62% in the prior year’s research.

The idea of delivery by drone has clearly captured the fancy of online shoppers. Not only do they expect it to happen soon, they like the idea, 80% say they’d pay more for drone delivery within the hour. “Amazon did a really brilliant job of introducing this idea to Americans,” says Maria Haggerty, CEO of Dotcom Distribution, an e-commerce logistics company. “It created a huge buzz, and people like the idea of having something they buy online being delivered to them super-quickly.”

The poll also finds that consumers are keen on other emerging technology, such as virtual reality, with 30% saying they’d shop more online if they were able to use a product like Oculus Rift. And 63% think such technology will shape shopping in the future.

Amazon continues to be the dominant force, with 96% of the sample saying they had purchased something from the behemoth in the last year. And while 40% are open to buying just about any type of product online, from groceries to high-ticket luxury items, they say they trust Amazon more than any other retailer in 10 out of 11 product categories.