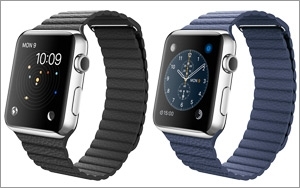 The message targets young, hip individualists dancing with Moto 360s and G Watches as part of the Android campaign "Be together. Not the same."

Unlike Google, Apple's advantage lies in its 453 retail stores worldwide, along with online sales. More than 120 million customers visited Apple's retail stores in the fourth quarter of 2014. Apple Watch will become available on April 24, but the company will begin taking pre-orders April 10. While the least expensive will sell for $349, the most expensive, the Apple Watch Edition with a solid gold frame will sell for $10,000.

Behind each timepiece -- accurate within 50 milliseconds, per Cook -- consumers will find features like Glances, which allows the wearer to swipe up from the bottom of the watch's face to check heart rate and find other information. A tap on the wrist allows wearers to check and respond to email or receive calls.

The Watch also allows wearers to pay for purchases with Apple Pay at participating merchants, view photos, control music and interface with Siri. Notifications like text messages keep track of daily news and sports teams and connect to social media.

Apple released the WatchKit software development kit in November. Since then, developers have created thousands of apps.

Cook said Apple has been working with medical researchers at top schools, like Oxford and Stanford, to develop applications that let patients of varying diseases participate in studies from an app on their phone.