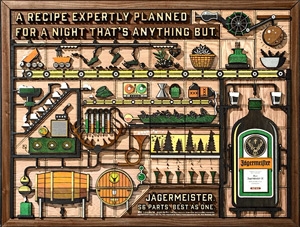 Even though Jägermeister is the best-selling imported liqueur in the U.S., there's a lot that even its fans don't know about it, according to Marcus Thieme, the brand's regional director, North America.

But there has never been more demand to know more about what's behind the brand, and that is coinciding with a boom in interest in and appreciation of craftsmanship in the U.S. — all of which adds up to the perfect time for Jägermeister to tell the story of its heritage, ingredients and process, Thieme tells Marketing Daily.

For starters, the 80-year-old German spirit's secret recipe was "inspired by the legend of St. Hubertus;" is comprised of 56 ingredients sourced from all over the world and undergoes 383 quality checks as it ages for a year.

The brand's new "56 Parts. Best as One" campaign, from the Deutsch agency, seeks to convey the complexity and craftsmanship of the brand through an ancient art form adapted to modern media.

Jägermeister commissioned three artists — Olivia Knapp, Yeahhh! Studios and DKNG — to create three original illustrations inspired by the brand’s pillars: heritage, ingredients and process. The illustrations were then turned into massive (more than six feet in length) wood cuts, each constructed from 56 intricately cut, etched, lacquered, hand-painted and varnished pieces that fit together like a puzzle.

The woodcuts were then photographed for use in ads spanning print (including Vice, Rolling Stone and Surface magazines), digital, social media, out-of-home and painted wallscapes.

The campaign is running this month through May, and again from August through November, in 12 U.S. cities.

Elements include video content created for Vice's "Munchies" series, as well as separate video shorts being featured on the brand's Twitter and other social channels, that convey the heritage, ingredients and process stories as they show footage of how the woodcuts were created.

The campaign also includes a partnership with Woven Digital, and digital ads and banners to drive consumers to Jägermeister’s Web site, where more in-depth content is featured.

"The campaign allows us to explain the brand in layers and small stories, and also to use layers of media," says Thieme. "You could say that all of the pieces came together in this concept."