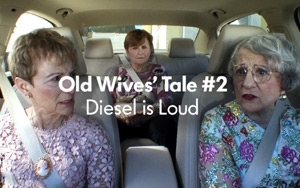 Volkswagen is using a trio of garrulous, opinionated octogenarians, the “Golden Sisters,” in a series of online videos, to tout its TDI Clean Diesel powertrains available in cars like Golf and Passat.

The automaker has a total of six videos in the series, of which it has launched four. In all of them, the trio touts the cars by articulating “old wives tales” about diesel, pretty much hitting all the consumer perception pain points: that diesels are sluggish and loud, that fueling them means an Easter egg hunt for a diesel pump, and, of course, that diesels are stinky.

Two of the videos deal with perception holdover from the bad old days of ’80s era (“rolling coal”) diesel cars, which were noisy, smoky and smelly. And although Millennials and Gen X won’t remember those days, the perception of diesel cars as malodorous rattle-boxes still holds water, or kerosene, per Jerome Austria, EVP of digital creative at AOR Deutsch. “It's a myth that continues across multi-generations. Many consumers still have little or no experience with diesel cars and that is true across all age groups.”

Another point the videos address, and one that makes Americans hesitate to buy diesel cars, is the perception that the only gas stations selling diesel are truck stops. In one of the videos, the women argue about where to fill up until the woman driving brings up a display on the telematics head unit showing all of the diesel stations in their vicinity.

In terms of the agency’s discovery of the women, and the choice to use them in the campaign, Austria tells Marketing Daily that the agency's creatives keep an eye out for trending content pretty much all the time. “During the creative process, the team found the ‘Golden Sisters’ online videos where they were making hilarious comments on pop culture events, and we collectively decided they'd be great for this.”

Austria says the agency did not impose a script on the women, but pretty much let them do their thing. "We outlined the story and the diesel points we wanted the Golden Sisters to cover, but most of what you see was their improvisation on set. We just wanted the sisters to be themselves because we knew how talented they are, so we ended up getting a lot of great stuff. We approached the shoot a bit more like reality TV production, where we set up the structure and let them riff within that. They did great in that setting, and the content we had to work with in the editing process made our jobs easy."

The campaign also has three TV spots (the women are not in these), plus print and digital. The videos are being pushed out from VW’s social channels (Facebook, Twitter, YouTube and Tumblr) and are all housed on YouTube as well as a custom TDI Clean Diesel Tumblr page, according to VW.

Jake Scott of RSA Films directed the TV ads, one of which has a guy on an 11-hour road trip trying to work around to asking his girlfriend's dad for her hand in marriage.

Volkswagen sibling Audi -- which is pretty aggressive these days in diesel -- last year launched the A3 TDI and diesel versions of its A6 and A7 cars, as well as a diesel for its flagship A8 and Q5 crossover. BMW has a large diesel lineup, with variants for the 3, 5, and 7 cars and its SUVs, as well. Mercedes-Benz launched its BlueTec diesel-emissions reduction technology in 2006.