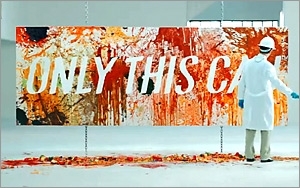 All paint is not created equal. Many brands may offer the similar colors and styles, but with a new campaign launching this week, premium brand Benjamin Moore is out to show that there’s more to wall covering than just how it looks, and where you buy it matters.

The campaign, from The Martin Agency, will run in two phases, dubbed as the “why” and the “where” phases. The first will show off the company’s different product lines and their specific attributes. One spot in the campaign, for the brand’s Regal Select line, depicts technicians loading different colored materials (gummy bears, crayons, etc.) into air cannons, then launching those materials at a paint-covered wall. A voiceover explains the paint’s formulation actively repels dirt and grime, as opposed to just being “easy to scrub.” The technicians easily scrape the words “Only this can” in the mess-covered wall.

“We’re getting ahead of the paint season a little bit, while consumers are still looking for inspiration,” Ron Schuller, chief marketing officer of Benjamin Moore, tells Marketing Daily. “It begins to demystify the notion that ‘paint is paint.’ We believe the quality attributes we bring to it are what matters.”

The second phase of the campaign, launching in May, emphasizes the company’s branded retail stores over the big box competitors where many people buy paint. The spots use two ventriloquist dummies as stand-ins for big-box employees, who can’t stay on topic when asked to recommend paints for specific jobs (like painting a baby’s room or prepping a wall).

“In the second phase, we wanted to share our expertise at retail, and let people know they have a choice beyond the big box,” says Vanessa Fortier, creative director at The Martin Agency. “[The] Benjamin Moore authorized retailers are independently owned and operated, and these retailers take pride in both the product and helping customers.”

The campaign is united under the tagline, “Paint like no other.” “The campaign is an opportunity for us to bring the tagline to life,” Schuller says. “It serves to clarify the business we’re in and highlight our history of innovation within it.”

The new television spots will run nationally and will be adapted for local markets, he says. It will also include radio, digital, print and social media as well.