Timex Counting Down To Earth Hour 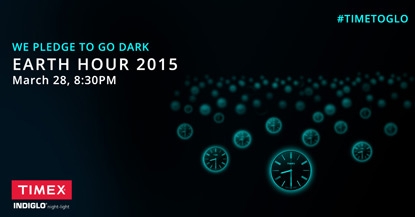 Timex is out to socialize Earth Hour, with a campaign counting down to the 60-minute celebration of sustainability, this year scheduled for March 28.

The effort includes an interactive microsite that counts down the hours and seconds until the event, featuring the Indiglo nightlight Timex uses inside many of its watches. When users make their pledge — to turn off the lights and dine by candlelight, for example — they can upload a photo, which is then transformed into “glowing pixie-dust particles,” says Michelle Prins, senior brand manager for style, and then share them on their social media sites. For every pledge shared with the #TimeToGLO hashtag, Timex is donating $1, up to $50,000. (The site uses real-time, 3D engine technology.)

And to drive sharing, the company has pulled together a group of Instagram personalities who are making and sharing their own Earth Hour content. The group includes fashion and style mavens, lifestyle bloggers, and even a foodie. A "Countdown to Earth Hour" video shows off some of the Instagrammers’ Earth Hour plans.

“We were looking for a campaign that would really build on Timex’s philosophy and belief in sustainability, and drum up some excitement around this younger demographic,” she says. “And Indiglo, which has been a feature in many of our watches since 1992, makes it easy to tell time in the dark.”

Timex Group USA, based in Middlebury, Conn., also conducted a survey of young adults, 18 to 34, to gauge their interest in conservation. It finds that 77% of those polled feel they could do more to help positively impact the environment, and that 94% are willing to change their lifestyle in some way to help deal with climate change. Just over half — 53% — say they think about how much electricity they use at least once a day. And when asked why they don’t do more, the most common reason given was that they didn’t know where to start.

“People want to make the change,” Prins says. “They just don’t know how to do it. This campaign lets them see what others are pledging to do, so they can get plenty of ideas.”

When asked which celebrity they would most like to spend EarthHour with, Ellen DeGeneres came in first, followed by President Barack Obama, with actress Jennifer Lawrence in third place.

Earth Hour began as a symbolic lights-off event in Sydney, Australia, in 2007. Organized by the World Wide Fund For Nature, it has grown to engage hundreds of millions of supporters in more than 7,000 cities and towns worldwide, Timex says.