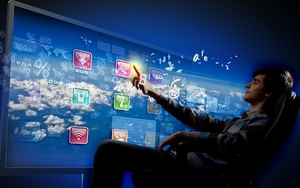 The viewing habits of cord-cutters ages 22-55 are not that different from the typical TV viewer, according to research from Horizon Media's Where Group.

They are most likely to be watching content on their couches at 8 p.m. for 1-3 hours. The vast majority (72%) watch content through smart or connected TVs, 36% prefer to watch via laptops, and 31% with mobile devices. In bed, however, they like to watch with laptops or tablets.

Despite having to go through the trouble of actively seeking out content to stream, they are still likely to multitask on their mobile devices while also watching video content on their connected TVs or laptops.

They increase their consumption on the weekends, binging on shows and viewing movies. Some 63% of cord-cutters watch more than three hours of content during the weekends.

“Not having isn’t really a problem for cord-cutters,” says Rachel Helmick, associate director of the Where Group at Horizon Media. “Since the majority (60%) do not have access to broadcast channels, they’re unable to watch live content like sporting events and award shows. Many will head to a bar or visit a friend’s place to view these events.”

In fact, cord-cutters believe in sharing content. Some 88% use passwords of others to gain access to streaming services, with their favorites as Hulu, HBO Go, and Netflix. Yet there seems to be little incentive for them to return to cords. They don't see the upside of unbundled cable options, saying they already get the content they want without needing to pay for it.

In fact, Horizon reports there appears to be a level of un-bundling fatigue. With all the possible ways to access cable network programs without a cable subscription, it has now become too costly to have subscriptions to multiple services.

In addition, there are differences in gender, with the majority of respondents being female (74% vs 26%). Other sources typically report that the cord-cutter population skews female. For example, according to Ipsos among those aged 18-49, more women are cord-cutters or “cord-nevers.”

Horizon’s survey, which was not nationally representative and qualitative by design, found that about 12% of women ages 18-49 are cord-cutters or cord-nevers, versus only 8% of males in the same age group.

Horizon said its survey specifically focused on how cord-cutters access video content, where they go to get it and when they typically consume video content on a typical weeknight and weekend.

This is Horizon's latest survey into cord-cutters. Earlier. the agency delved into news and stats around cord-cutters and explored the debate concerning the impact of cord-cutting on the TV medium. A second report profiled cord-cutter types, their reasons for switching and how their viewing behaviors differ from cable subscribers.