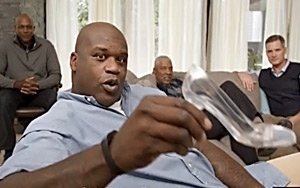 The first weekend of the NCAA Basketball Tournament can be a marketer’s dream. Rapt audiences hanging on every play, nearly all day, for four straight days.

But it can also be hard to break through. There is all kinds of messaging vying for viewers’ attention. Among the brands with a huge presence during the tournament, AT&T and Coke Zero are seeing the biggest lift, according to YouGov’s BrandIndex.

Coke Zero, which bowed more entries in its “Enjoy Everything” television campaign, showed the biggest gains in the Buzz score, while AT&T came in second. AT&T --, which, in addition to its television ads featuring basketball legends, is also the sponsor of the March Madness apps -- showed a 5% increase in purchase consideration, compared to its score from the two weeks prior to the tournament’s beginning, more than double that of the No. 2 brand on the chart. (The telecom also had a small boost in its word-of-mouth score, as well.)

“What they’re doing seems to be very targeted to the audience, which is male and a little younger-skewing demographic,” Ted Marzilli, CEO of YouGov BrandIndex, tells Marketing Daily. “It fits in with the [demographic’s] lifestyle.”

While a host of other brands has failed to make a dent in consumer perception, there is still plenty of opportunity for them to break through before the tournament’s end, Marzilli says.

“People are still being bombarded with advertisements and communications from brands,” he says. “It’s a tribute to AT&T and Coke Zero that they’re breaking through and being noticed, but it doesn’t mean that some of the other brands won’t get their fair opportunity.”

Indeed, as the tournament is narrowed, there are nearly as many people focused on fewer games, meaning that the impact in some later games -- including the championship game -- can still be felt.