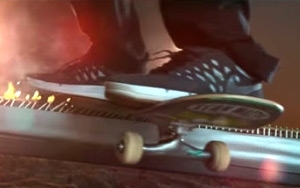 PepsiCo's Mountain Dew is launching the brand's first global campaign as it officially reintroduces its 20-year-old "Do the Dew" marketing theme.

The global effort is being kicked off with two shareable videos directed by Justin Lin, director of "The Fast & The Furious" franchise, the upcoming season of HBO's "True Detective" and "Star Trek 3" (due out next year).

One video, "Fireboard," features professional skateboarder Sean Malto demonstrating an unusual way to light a beach bonfire (shown above). The other, "Directions," follows Olympic snowboarder Scotty Lago as he boards down a mountain to join a party.

The original "Do the Dew" campaign was before its time in encouraging people to celebrate their uniqueness and make the most of the present moment, Pepsi Beverages North America CMO Simon Lowden points out in a video announcing the global campaign. The tagline "represents the attitude of a community that really seeks to live authentically," he says. Mountain Dew's core target audience is Millennial men.

The campaign — which will run in North America, Latin America, Western Europe, the Middle East, India and Asia-Pacific — is 55% television and 45% digital, according to The Wall Street Journal, although it also includes print and out-of-home. Consumers can use #DoTheDew to follow the campaign and share its digital content on the brand's local-country Facebook, Twitter and Instagram channels.

Mountain Dew — which includes regular and diet versions, other flavors and the KickStart energy line — is one of PepsiCo's largest and fastest-growing brands, with global sales of about $9 billion. Regular Mountain Dew was the fourth-best-selling carbonated soft drink in the U.S. in 2014, after Coca-Cola, Pepsi-Cola and Diet Coke, according to Beverage Digest.