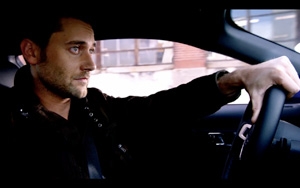 In movie and TV history, the Ford Mustang has been the getaway car, whether from the bad guy, the Man, or less tangible enemies and shackles. Now Mustang GT is the vehicle of independence for Tom Keen, the ex-spy in NBC Universal's hit show “The Blacklist.”

In a partnership launching April 30, Ford not only has product integration in the show, but a raft of custom Mustang spots produced by the network with Team Detroit, Ford's agency. The effort features a 60-second spot and shorter versions that star Ryan Eggold speaking in character — as Keen — about the virtues of self determination, cut with chase scenes as he drives the Mustang GT away from nefarious pursuers.

The ads will also run on May 7 and the May 14 season finale. There are also four 10-second “snackable” spots featuring Keen that will go out on NBCU's and Ford's social channels, driving people to #UnleashTomKeen. Those began rolling out on Monday on NBC and Ford social platforms.

Ali Tarrant, EVP of client solutions at NBCUniversal, explains that the network’s relationship with Ford around “The Blacklist,” which began with the show's 2014 premiere season, exemplifies what the network is trying to do internally toward cultivating integrated partnerships with advertisers. “Time and time again, we have seen that when you have the ability to create a relationship in year one, learn about each other’s business and how to best work it, in year two you see it go from good to great.”

Last year, the show established Keen as a Mustang guy, and Ford advertised around the show. Tarrant says that Keen, McQueen-like, belongs to the pony-car driver. “[The Mustang] It has become a natural part of his character,” she says.

Kathleen Kross, experiential marketing manager at Ford brand content and alliances, tells Marketing Daily that coming back to NBCU to partner on an integrated “Blacklist” campaign was an obvious choice because of the strength of last year's performance. She says Ford and Team Detroit provided the initial direction and product messaging, and worked closely to finalize the concept with NBCU. “We wanted [the creative] to embody both the [Keen] character and the [Mustang] brand.”

Tarrant says the effort includes long-form, behind-the-scenes video of the making of the spot on NBC.com. “The way it works with [Eggold] and his character — his thoughts and perspective on the product, it all comes to life.” Kross says his character this season is challenged to either start a fresh life, one that is completely his, or stay undercover. “And the Mustang is all about igniting that independence.”

The custom ads also benefit from appearing immediately after station break, notes Tarrant, who says that with custom content tied to the program, it should be seamless and that proximity makes the connection stronger. "We are always looking to make sure the product is placed really well. It adds value to the show and viewers.”

NBCU's Client Solutions Group was reorganized over the past couple of years to make integrated programs across NBCU's portfolio easier to do, per Tarrant. “With 15 cable and two broadcast channels, and our digital properties, we are having many conversations with clients. What we have done is to take people from different areas of expertise, including creative, and integrate them together in one team that lets brands come to us and have one conversation. It lets us engage with brands like Ford in a holistic way, and ideate with them.”