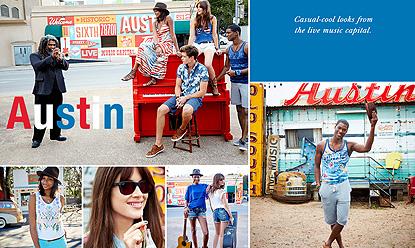 Macy’s is introducing a new summer marketing campaign, celebrating the country’s most American places. And in a big social media push, it’s calling for people to share their own favorites, using the #AmericanSelfie hashtag. Customers can upload shots of themselves celebrating what America means to them. And as was true with last year’s “American Icons” theme, the effort supports Got Your 6, a military nonprofit that helps veterans and their families.

For every photo that gets uploaded on Facebook, Twitter or Instagram, Macy’s will give the organization $1 -- up to $250,000. And on May 16, it’s planning a “Got Your 6 Saturday.” Shoppers can pay $3, with all proceeds going to the group, and get a pass knocking 25% off the day’s purchases.

The campaign includes print, digital and in-store components, as well as a 112-page direct mail piece, with settings that are as notable as the fashion: Calvin Klein’s clothes are photographed at the new Whitney Museum of American Art in New York City, for example, while the Thalía Sodi collection is shot at an Art Deco hotel in South Beach. And the effort also includes marketing imagery from O’ahu, Atlanta, Austin, Havana, and San Francisco’s Chinatown. (While J. Walter Thompson New York is Macy’s creating agency, a spokesperson says this campaign was created in house.)

Separately, the company also reports that it has taken the wraps off its new off-price format, with four Macy’s Backstage stores set to open this fall in the New York City area.

While other department stores, including Saks with its Off 5th brand and Nordstrom with its Nordstrom Rack, have been in the offprice segment for some time, Macy’s has held off. And its announcement back in February that it would begin testing generated generally positive buzz -- especially as a way to win with younger customers, many of whom don’t really know what a department store is.

“Macy’s is not alone,” says Mary Brett Whitfield, SVP with Kantar Retail, based in Columbus, Ohio. “There’s no expansion runway in terms of opening new department stores. And while online has been a growth engine for several years, going forward, they are not alone in that new prototypes types are one of the key tools we have to find new shoppers.”

And while there is always some risk that a new brand will cannibalize sales at the old one, “this will appeal to Gen Y, and a shopper that didn’t grow up shopping department stores. She’s interested in a value format, and finding things that are a little different, a little unique.”

Somewhat smaller than its typical store -- at 30,000 square feet -- Backstage will offer clothing for women, men and children, as well as shoes, accessories, housewares, home textiles, jewelry and intimates. And as part of the effort to create a concept appealing to Millennials, it will offer amenities like free WiFi, spacious fitting rooms, and in one location, a café.

Plans call for a mix of clearance items from Macy’s stores, plus special buys from other fashion brands -- many 20 to 80% off --  putting it in competition with chains like TJMaxx and Marshall’s.

“We believe we can deliver a whole new level of value to customers who appreciate fashion and love to hunt for a bargain,” says Peter Sachse, Macy’s chief innovation and business development officer, in its announcement. “Macy’s Backstage stores will be designed to surprise and delight customers with continuously updated and fresh merchandise assortments focused on delivering current fashion.”