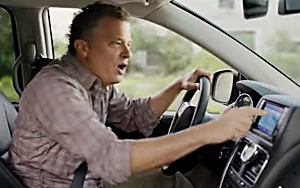 "Life is crazy. Lunch doesn't have to be."

That's the tagline for Oscar Mayer's new Deli Fresh campaign, which contrasts chaotic (um...) slices of life with the dependable quality of the sandwich meats.

A 30-second TV spot from McGarryBowen titled "Keep It Simple," viewable on YouTube, shows a typical family man encountering frustrating complications and hype as he goes about his day.

He winces as a waiter describes the day's special as "hand-agitated baltic sea foam"; he blows off a pet-store employee trying to sell him kitschy rain boots for his dog ("I think we'll just go with the paws"); he's mystified by a text message ("penguin heart heart unicorn"); and he's bushwhacked into talking with his Aunt Ethel by his "smart" car phone (shown above). But there's zero hassle when he and his wife and kids sit down to share sandwiches made with Oscar Mayer Deli Fresh, because "It's deli quality every time."

The restaurant and car phone vignettes are also being used as stand-alone 15-second spots. Outside of television, the agency work is being featured only on YouTube.

Users of Oscar Mayer's social media channels (including Twitter and Facebook) and a "sanewich" campaign microsite are instead being offered two real-life home video clips (used with the shooters' permission): a baby using a toy tractor to grind French fries into the carpet, and an SUV driver setting off car alarms during an inept attempt to parallel park. The two clips are also being used in pre-rolls.

All of the social channels, including YouTube, as well as the campaign site and the brand's main site, are employing a banner featuring the "Life is crazy. Lunch doesn't have to be" slogan as headers or prominent graphic elements.

All of the channels also are encouraging fans to join in the conversation and share their own crazy moments, using the hashtag #sanewich.

In addition, later this week, the Kraft Foods brand will launch a partnership with YouTube's “What’s Up Moms” stars, featuring custom video demonstrating how Deli Fresh comes into play during moms' busy schedules.