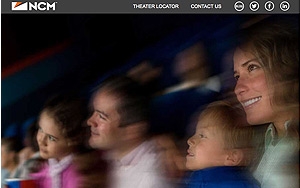 The nation’s largest cinema advertising network unveiled a raft of changes and new products at its upfront presentation on Wednesday, beginning with a new name and tagline. The company formerly known as National CineMedia is now just NCM --  America’s Movie Network, emphasizing its ability to connect with millions of younger adults in a captive context, reaching an audience bigger than any of the broadcast TV networks on weekends.

NCM also gave a preview of its new audience-targeting tool, called the Cinema Audience Targeting Optimizer or CATO. The tool will allow cinema advertisers to create media schedules based on movie genres that deliver specific audiences -- selected, for example, on the basis of age and gender.

CATO will also enable NCM to begin offering specialty networks to reach particular audiences, for example, the NCM Hispanic network and an NCM High Income network. Currently in testing with a number of unnamed clients, NCM expects CATO to be available for all its cinema ad inventory in 2016.

On the consumer front, NCM is revamping its pre-show FirstLook program with the addition of its first hostess, E!’s Maria Menounos, who previously hosted "Extra." Menounos and her partner, producer Keven Undergaro, will also produce original content for NCM. According to the company, FirstLook reaches more than 700 million moviegoers a year across its network of 21,000 screens.

In a separate interview, NCM president of sales and marketing Cliff Marks noted that so far, 2015 has been a good year at the box office, thanks in part to big hits in multiple genres, including "Fifty Shades of Grey," "American Sniper" and the "Avengers: Age of Ultron." Big releases in the second half of the year, including "Star Wars Episode 7: The Force Awakens" should keep the momentum going.

Going into the upfront, NCM revealed that total revenue increased 9.5% from $70.2 million in the first quarter of 2014 to $76.9 million. However, the company incurred a number of costs stemming from its failed attempt to merge with Screenvision; the merger was stymied by a lawsuit brought by the Department of Justice on anti-competitive grounds.