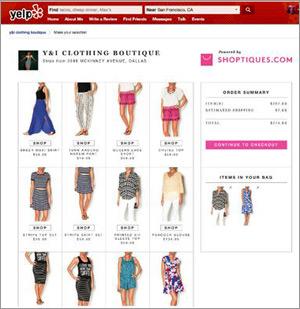 Marketplaces continue to emerge as the next model forcing change across the Internet, as companies turn directories and recommendation engines into virtual malls that let consumers make a purchase from any page. The latest brings a buy button to Google Shopping, cements a deal between Yelp and local boutique online aggregator Shoptiques, and forms a new marketplace in Saudi Arabia called Bagedo IB.

Shoptiques.com is Yelp's first partner in the shopping vertical, which contributes about 23% to reviewed businesses. The partnership will roll out during the coming months, with more than 200 businesses live today. The companies expect thousands of boutiques available by the end of the year.

When consumers search through Yelp looking for boutiques featured on Shoptiques they will see a Shop Now button on the top right corner to make the purchase. About 1,000 of 2,250 stores aggregated by Shoptiques are shoppable on Yelp, and the partnership will continue to grow throughout the next few months.

Yelp's categories range from food ordering, spa treatments, winery tastings, hotels, and now boutique shopping. Consumers completed about 1.5 million transactions on Yelp's platform as of the end of the first quarter of 2015.

The promise of conversions also prompted Google to add a buy button on product listing ads in Google Shopping. YouTube Trueview ads recently added a Buy button, which takes the consumer to the brand's site to make the purchase.

Ecommerce also refocuses cultures, allowing women in Saudi Arabia to shop online. Many do not drive or shop by themselves, so it opens a new market for local and international stores, according to Alanood Basheer, GM at Bagedo IB, and Renad Rajab, digital marketing manager at Bagedo IB, which launched earlier this year.

Bagedo IB gives individuals and boutiques in the country an opportunity to sell their wares online through a searchable marketplace, selling everything from homemade clothing to baked goods through the virtual mall.

An estimated 28 million people live in Saudi Arabia; about 3.9 million make online transitions with majority of consumers between the age of 25 and 54, according to Bagedo IB, citing numbers from Firnas.org. Ecommerce grew about 34% between 2013 and 2014, with 72% of the population searching the Internet for products.