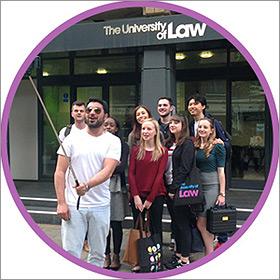 The University of Law (ULaw) and its digital creative agency Nonsense are launching #LiveProspectus, a social media-curated prospectus to recruit new undergrads, created by students for students.

“We believe there is far more to the university that you can ever hope to fit in a printed brochure. What more powerful way to bring it to life than showing it through the eyes of our current students?" asks Lysette Gauna, head of brand at ULaw, which has several campuses in the UK.

"They not only have the most relevant insight into studying here, but also really understand the questions that might be asked,” she added.

The recruitment platform is based around the #LiveProspectus hashtag and current students will be responsible for updating the social-media content on the site by submitting their own materials, particularly images and videos.

Some of the current content includes student-made videos explaining why they decided to study at ULaw, Instagram photos, and LinkedIn profiles of alumni. There is also some nonstudent contributed content, such as Google links and maps all designed to give prospective students an authentic, real-life picture of the university.

"The whole thinking behind the concept came from the insight that even though you may not want to be a lawyer, studying law at ULaw opens the door to a world of possibilities," the agency said.

A partnership with social-media agency Social Chain -- the UK's largest influencer network with over 60 million followers -- will help ULaw to seed content across some of its owned channels, including Uni Problems. Each week one of its influencers will create a bespoke piece of content to be published across its platform, and this influencer will also encourage their fans to visit the Live Prospectus site. This is one of the first university partnerships Social Chain has done, say Nonsense executives.

“Our creative team identified that the traditional prospectus model -- thorough as it may be -- doesn’t really show prospective students what studying at a university is actually like. We’re confident that ULaw’s #LiveProspectus will be able to do just that and provide prospective students with a much more modern and engaging way to explore the University as they embark on their studies," says Rob Mosley, creative director at Nonsense.

Still, although students may be key contributors, professionals will have ultimate authority of the content to prevent controversial or negative submissions. Nonsense has worked with the school since February 2015 after winning a competitive pitch.