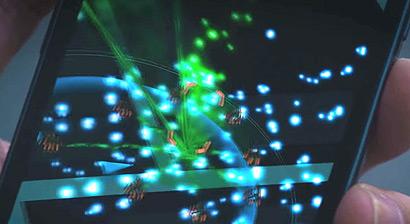 Niantic Labs, a combination of location-based gaming and augmented reality, will become its own independent company.

Niantic makes the massively multiple player mobile game Ingress. It augments reality where players go to real-world landmarks, such as a public building or sign by laying computer-generated images on top. Teams compete against each other in real-world missions, capturing landmarks with elaborate science-fiction storylines.

Story lines within the game could lead Niantic to form closer ties with brands and Hollywood. The company believes the separation from Google will allow creators to attract even bigger audiences "with some amazing new partners joining Google as collaborators and backers."

More than 250,000 players have downloaded the game using the platform more than 12 million times since 2013, according to Niantic Labs.

The move comes days after Google announced a major restricting. Presumably, the new company will fall under the Alphabet holding company, making it the first major change since Google cofounders Larry Page and Sergey Brin made the announcement.

Advertisers will like see more shuffling of companies, making it easier for investors and advertisers to get a clearer picture on where investments are spend and returns earned.

Pivotal Research Group Analyst Brian Wieser believes more companies should take the path of creating a holding company to have increased transparency with profit and loss.

"Whatever figures Google eventually discloses, we thought the news highlights a bigger issue around the provision of transparency into public company businesses," Wieser wrote in a research note. "In all cases we recognize that companies provide disclosures that at least meet some standard that matches a regulatory requirement, and in most cases, investors aren't widely clamoring for more data.

Data basically represents the manner in which the business is managed, Wieser wrote.