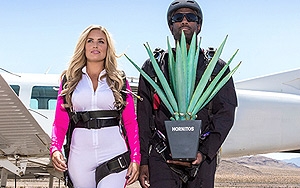 Multicultural agency the Community, part of SapientNitro, is launching its first campaign after being named digital agency of record for Beam Suntory’s tequila brand Hornitos in May.

The concept is based on the premise that while every tequila should be made using 100% “virgin” agaves, Hornitos Tequila believes that an “experienced” agave is the best agave for your drinking pleasure.

The campaign kicks off with the "Road Trip" ad that explains the work is aimed at millennial men.

The spot states: “To make not just any tequila, you need not just any agaves. And that means raising them a little different. This summer we’re taking agaves on the road to teach them what it takes to become #NotJustAnyAgaves.”

The second ad, "Skydive," showcases an airplane taking off, an agave getting a kiss from a beautiful companion and then skydiving off the plane.

Fans are encouraged to follow the agaves’ journey on Tumblr with new spots and images highlighting a new adventure to debut every week as well as on Instagram. They are also invited to submit their own adventures with the #NotJustAnyAgaves hashtag.

"Whether it is an agave speeding through the desert next to blonde driving a convertible, or jumping out of a plane to go skydiving, throughout the summer, Hornitos Tequila will add a little life experience to its agaves," said agency executives.

The Community has served as Beam Suntory’s above-the-line creative agency for its tequila portfolio since 2013. Previously, the "Grab Life" by the Hornitos campaign suggested that its tequila was superior by showing a man with his friends saying it doesn't matter what tequila he was served. The following clips show the poor decision of the answer with him saying it doesn't matter about his haircut, resulting in a patchy crop, nor that it matters about tattoos causing him to have a face tattoo of cat whiskers.