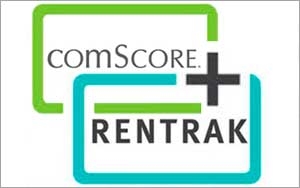 Making a major move for new digital and traditional media measurement services -- as well as amping up competition with Nielsen -- comScore is buying Rentrak.  The deal is valued by some at about $732 million, based on today's closing stock market share price.

Rentrak -- which focuses mostly traditional media measurement, including TV and film -- and comScore, with its business deep in the digital media space, say the merger will help the combined company focus on immediate pressing industry goals such as coming up with new standards for the next generation of cross-platform measurement.

The move challenges Nielsen in tracking how people consume media.

"This merger also recognizes the critical importance of combining digital and TV assets for next generation media measurement, which requires a higher degree of precision at both a national and local market level," Matta says in a statement.

Shareholders of comScore will own approximately 66.5% of the combined company, while Rentrak shareholders would own about 33.5%, under terms of the deal. Each share of Rentrak will be converted into the right to receive 1.15 shares of comScore.

In response to the deal, Nielsen, a competitor to both companies, stated: “Nielsen has the only total audience measurement, comparable across all screens. All of our data is fully representative of the U.S. population, and we deliver truly independent measurement.”

It added: “There are myriad analytics options for the media industry, but Nielsen’s focus is on delivering the actual currency ratings data used for trading billions of dollars in advertising. This requires superior quality, industrial-strength delivery and gold-standard audited processes and methods.”

In positioning the company's independence for media buyers and sellers, Matta said in an investor call that the WPP Group -- a major global advertising/media company, which has investments in both companies -- will not have a seat on the combined company's board.