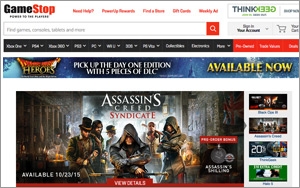 GameStop announced today that it had accrued 32 million loyalty members, who now account for nearly 75% of all GameStop sales. This means the company's loyalty members spent just under $7 billion in 2014, considering that GameStop reported their 2014 total global sales to $9.30 billion.

When combined with email marketing, loyalty programs can drive customer engagement and sales. Loyalty-powered emails increase ROI by more than 50% when compared to regular promotional content, per  Salesforce and 500 friends.

Three out of four consumers admit to buying products and services from emails at least once a month, according to a recent BlueHornet Study. Some 23% t of consumers buy items advertised in emails multiple times a month. Almost half (44%) of respondents said they were more likely to purchase an item after receiving an email offer, and 35% said email marketing influenced their

2. Consumers Want To Be Rewarded

PowerUp Rewards members receive points that are redeemable for rewards, which include video games, gaming gear and studio meet-and-greets.

Consumers want to be rewarded for their loyalty and there are over 3 billion U.S. loyalty program memberships. This is a 26% increase since 2013, according to a COLLOQUY report.

A global survey by Aimia reported that 85% of consumers admit to being a member of at least one customer loyalty program.

GameStop's Power Up Rewards program has a mobile app downloadable for both Android and iOS devices, which allows program members to easily access their account information and browse the PowerUp Rewards catalog of featured products.

A mobile app empowers marketers to connect with customers on the go, and is an especially useful tool for connecting with younger customers. 33% of mllennials track rewards via mobile apps, according to a recent study by Excentus.

Utilizing digital channels is also key to keeping consumers happy and loyal. Almost 90% of consumers have a negative sentiment towards customer loyalty programs, according to a recent report by Capgemini Consulting. Many respondents cited a lack of digital awareness as a leading factor, and 33% said that a lack of a seamless multichannel experience was a factor in their negative opinion of loyalty rewards programs.

An omnichannel, mobile-friendly approach is especially true for email marketers, considering that more than half of all emails are read from a mobile device.

Retailers should incorporate loyalty rewards into their email marketing to boost sales and loyalty.