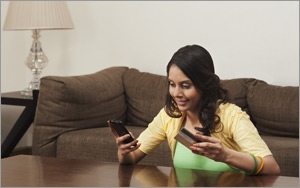 Holiday shopping no longer means taking a multi-hour trek to the local mall on Black Friday. Now it requires the consumer to search and tap a few buttons on the smartphone to do the buying.

The findings come after analyzing Google data and working with Ipsos MediaCT to survey consumers on their holiday shopping intentions. The data shares predictions for the digital trends impacting this year’s biggest shopping season.

Shoppers spend 7% less time in each mobile session, but the share of purchases on smartphones rose 64% during the last year. Some 30% of all online shopping purchases now happen on mobile phones, according to Google data.

Some 61% of shoppers will have already begun researching their purchases before Thanksgiving weekend -- up 17% from 2014. While research begins early, the majority of purchasing will take place later in the holiday season because smartphones have made the urgency of running to the store a thing of the past. Consumers can shop from their phones.

In fact, shopping-related searches on mobile have grown more than 120% year-over-year and are rapidly approaching those seen on the desktop.

Aside from the rise in mobile commerce, Google data also finds an increase in the influence of mobile devices on local commerce, with consumers increasingly using their phones to buy products in-store. Some 52% of shoppers plan to use a smartphone for holiday shopping this year before they visit a store, and 82% will consult their phone while in a store. People are searching 37% more inside department stores than they were last year.

While big sale days are decreasing, one day still stands out in shopping popularity for mobile -- Sunday is consistently the most popular day for shopping on smartphones. On average, mobile shopping searches are 18% higher on Sundays, compared with the rest of the week, per Google data.

It's not only gifts for others, but also for themselves. On average, data from Bizrate Insights suggest more shoppers purchase gifts for themselves through Black Friday, and then focus on buying for others in December. In 2014, the switch occurred on Cyber Monday.