Google Inbox Email Thinks For You With Smart Reply Feature 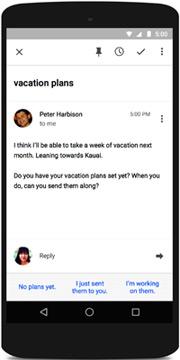 Google's latest email app for Inbox, which the company released in October 2014, aims to make it easier for users to respond quickly. Before pressing the reply button, Google will suggest three responses based on the content in the emails received. The phrases appear at the bottom of the screen, similar to Apple iPhone's instant replies.

Launching Nov. 5, the Smart Reply feature, announced Tuesday, will learn depending on the responses of the user. It relies on machine-learning algorithms that understand the context of a message to compose replies that make sense without prior programming.

"The Smart Reply System is built on a pair of recurrent neural networks -- one used to encode the incoming email and one to predict possible responses," writes Greg Corrado, senior research scientist at Google. "The encoding network consumes the words of the incoming email one at a time, and produces a vector (a list of numbers)."

The system captures the "gist" of the written words without getting hung up on diction. For example, the vector for "Are you free tomorrow?" should be similar to the vector for "Does tomorrow work for you?"

Eventually, the model learns how to predict likely responses. Machine learning is becoming more common, and Google uses it in many apps.

One challenge of working with emails is that they can become very lengthy, and this is where recurrent neural networks take over.

One bizarre feature of Google's early prototype was a propensity to respond with "I love you" to nearly anything, Corrado explains. "As adorable as this sounds, it wasn’t really what we were hoping for," he writes. "Some analysis revealed that the system was doing exactly what we’d trained it to do, generate likely responses -- and it turns out that responses like 'Thanks,' 'Sounds good,' and 'I love you' are super common."

Smart Reply is more evolutionary -- Apple's iPhone provides a rudimentary feature when the phone rings, and similar features are used on smartwatches. Google's, however, does learn from experience. And that's the revolutionary part behind the tool.