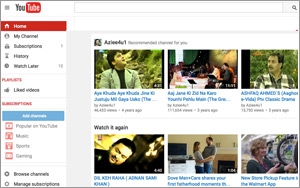 Google has begun allowing third-party viewability reporting on YouTube, broadening the options in addition to Active View, according to the company.

Moat, Integral AdScience, comScore and DoubleVerify are a select set of third-party vendors that have been approved to report ad viewability on YouTube. The shift begins with Moat in early 2016.

Google uses the MRC-defined industry standard as a base-line for viewability to assist advertisers and agencies. To support this we have begun launching, explains Sanaz Ahari, group product manager for brand measurement at Google, in a post.

The supplementary metrics in Active View such as the ability to see average viewable time -- and soon, when an ad is 100% in view for any length in time -- should support this, per Google. These are the first few in a lineup of supplementary metrics that will provide advertisers with additional data points relevant to their specific campaigns and needs.

Viewability has long been a focus for Google. Using Active View technology as a foundation, Google launched the ability to buy only viewable impressions on the Google Display Network in December 2013, and recently completed moving the last advertiser campaigns from CPMs to viewable CPMs. Google also has worked to ensure viewability rates on YouTube are amongst the industry's highest.

Active View now works across video, display, mobile Web and mobile apps on YouTube and for publishers using DoubleClick for Publishers. The company claims it's been adopted by more than 80% of advertisers using the DoubleClick platform.