The North Face Transports OUTSIDE Subscribers To Nepal Through Virtual Reality 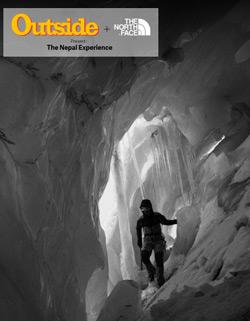 The North Face will transport 75,000 subscribers of the publication OUTSIDE to the mountains and landmarks of Nepal through a virtual reality campaign (VR) scheduled to run in December.

The supplier of advanced outdoor apparel, equipment and footwear plans to provide a VR headset, Google Cardboard, with the monthly edition of OUTSIDE magazine.

Eric Oliver, director of digital marketing, The North Face, hopes sharing these expeditions through an immersive VR experience will help spark people’s interest in getting outdoors. The company did something similar at the SXSW Interactive 2014.

The VR portion of the campaign accompanies an online feature with a still photo gallery, and advertisements in print and online, but it's not clear whether the company and publisher plan to integrate a campaign to drive search traffic to a landing page that takes site visitors through the journey. OUTSIDE will host a YouTube 360 version of the video on OUTSIDE Online.

Sam Moulton, OUTSIDE’s content marketing director, told SearchBlog that the publisher will optimize the content for search engines, but will leave the paid -search ads to The North Face.

The VR part of the campaign is similar to the campaign that the one million print subscribers to The New York Times recently experienced. In this case, OUTSIDE subscribers will need to insert an Android or iOS smartphone with JantVR app installed into the headset to get it working.

The Google Cardboard virtual reality viewer will allow subscribers to access “The North Face: Nepal,” a new VR experience produced in conjunction with Jaunt, a company with expertise in cinematic virtual reality, which follows The North Face athlete Renan Ozturk through Nepal.

"The North Face: Nepal" captured with Jaunt’s proprietary 360-degree, stereoscopic 3D cameras, takes viewers from Nepal’s cities and lower hills up to some of the highest points on Earth. The clip becomes available to view at The North Face London, New York and San Francisco store locations, but the OUTSIDE campaign will make it accessible for others at home.