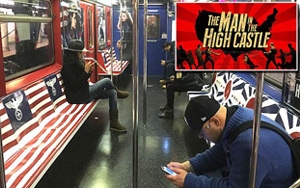 You wonder if marketers really think things through before they find out they’ve done something offensive, or if being offensive is just part of the campaign.

That question comes around again now, as Amazon publicizes “The Man in the High Castle,”  the fairly gripping series that imagines the Axis powers won World War II and have divided the U.S. up--Japan got the West Coast, the Nazis rule the East Coast. The 10-part series, based on Philip K. Dick's 1962 novel, debuted Nov. 20.

A budding controversy now is that Amazon has decked out a subway train--the well-traveled, touristy S shuttle train that goes from Times Square to Grand Central Station, back and forth-- covering the car with startling imagery from the show.

That includes a vinyl wrap that covers the seats with the stripes the American flag and in the place where the field of stars would be, a slightly altered Reichsadler, or Imperial Eagle that was used by the Nazis. On the other side of the train, the seats have been covered with a stylized depiction of the Japanese Rising Sun flag, representing the new West Coast flag. (That’s the way the flags appear in the series, except a swastika is on the American flag, not that eagle.)

If it was just a small promotion, just a series of cardboard ads stripped across the the train, that might not raise eyebrows or blood pressure. As it appears on the subway--the symbols engulfing the cars--it seems extremely callous, tin-earned, mean and just plain stupid.

New York’s subway authorities say the promo fits within  the MTA’s First Amendment guidelines. There have been other controversies about what kind of advertising is protected on New York subways. This is seen as a promotion for a film, not a political statement, apparently. And that, legal-beagle, seems defensible.

For Amazon Prime Video, on the other hand, the subway promotion is contemptible. There are survivors of Japanese violence and  internment camps and World War II veterans I would suppose would feel very uncomfortable riding in that environment. Particularly in New York, the overwhelming size of the Nazi imagery is wildly, maddeningly insensitive.

The series, as I mentioned briefly, is a good drama in which repressed Americans use the Nazi salute, pocket change is given in marks, not dollars, travel is restricted and authorities kill mentally ill people rather than attempt to treat them.  But that’s a drama, in a dramatic space. It’s not taking the train from point A to point B as a part of the regular day-to-day of life in the city.

Right now on Twitter, the reaction is pretty universally negative.  . “I wanted to be excited for High Castle......before you literally decked subways out in nazi regalia....” wrote one.

On the Gothamist Website, Evan Bernstein, the New York regional director for the Anti-Defamation League, takes aim at the promotion.  "On the train, seeing the American flag paired with a Nazi symbol is viscerally offensive, because there is no context as to what it means,”  he said. Gothamist reports the display was arranged by Outfront the outdoor advertising company owned by CBS.