In a move that signals a potential shift in the way the ad industry thinks about its most fundamental principles of media planning -- reach and frequency -- a leading media planning software provider has created a way to calculate it based on the amount of time consumers actually spend with media. The new tool, which will be introduced by Telmar early next year, isn’t intended to replace conventional reach and frequency models that are gospel for many advertisers and agencies, but is designed to give them another way of looking at it: a temporal way.

The approach, which Telmar calls RFT (for reach-frequency-time), comes at a time when a number of industry stakeholders are beginning to rethink the value of the time consumers actually spend with media, and how it can be leveraged to assign more value to the media that deliver it.

Earlier this year, a number of premium publishers began adopting advertising models that charge advertisers based not just on “impressions” -- who and how many people are exposed to their ads -- but for how long they are. The Financial Times introduced its “cost per hour” (CPH) model to advertisers in May, offering it as a replacement for the cost-per-thousand (CPM) impressions models historically used by publishers.

In July, mobile video and rich media format developer Sled Mobile introduced a “cost-per-second” model enabling advertisers and agencies to “de-risk” their media budgets by paying only for the time consumers were exposed to their ads on mobile screens.

In November, The Economist introduced an “attention buy” format that charges advertisers based on how much attention readers pay to their digital ads.

While the ad industry has been organizing around the concept of a minimal viable exposure of time -- the Media Rating Council recommends one second for a banner ad and two seconds for a video ad to even be counted as an impression -- the shift to more explicit measures of time-based exposure has been slow to gather steam, in part, because there is little foundation in media planning theory for thinking about it that way. The original precepts of reach & frequency planning were based on static assumptions of media exposure and did not account for the amount of time individual people actually spend with them.

“This is a giant step forward for brands in the age of global planning,” asserts Paul Gold, vice president-strategic data operations at Telmar, who helped develop the new RFT analyzer. To illustrate the point, Gold says, “imagine if Coke found that its drinkers used their smartphones 20% less than Pepsi drinkers in a part of the world where no media planning data existed. That would have a huge impact on their ability to evaluate alternative media investments in the market.”

That’s exactly what Gold says Telmar found when it conducted a pilot study to serve as a “proof of concept” for the RFT analyzer. Not surprising, it picked a highly topical advertising category where there are clear lines of division among the time that consumer segments spend with various media: politics.

The study looked at all the major media used by the respondents -- digital, print, radio, and TV -- but some of the most interesting analysis come from looking at RFT planning within a medium, utilizing one of the most fundamental forms of temporal media planning: the daypart.

On that basis, Telmar analyzed three different TV schedules of 200 gross rating points each applied to three daypart plans: daytime, prime-time and one dispersed throughout the day. The test showed markedly different reach and frequency curves for each voter segment. Daytime-only scheduled performed the worst. Prime-time schedules delivered the greatest reach among Democrats and undecideds. Dispersed schedules delivered the greatest reach among Republicans.

One of the more interesting -- and potentially topical -- parts of the Telmar study is that it also analyzed the consumer segments based on whether they installed and used digital ad-blocking software. On that basis, Telmar found that Hillary Clinton and Ben Carson would fare better than Bernie Sanders and Trump in terms of getting their online ads seen on user’s browsers, because those candidates had lower percentages of supporters who installed ad blockers.

Telmar President Corey Panno says the new RFT analyzer isn’t intended to be used as a form of media-buying “currency,” although it will be replicating the studies and offering the tool in markets where there is little or no audience data available, including Third World markets in Africa, Asia and South America.

But the real purpose of the analyzer is simply to give planners and ad executives another way to think about the role of consumer time spent with media plays in planning reach and frequency.

“We should always be challenging those original principles,” says Barry Lowenthal, president of The Media Kitchen, who hasn’t been briefed on the new Telmar product yet, but said he agreed with the idea of thinking beyond static reach and frequency. “They were the best that we had at those times, but what happens is that they sort of shift from principles and become laws. We shouldn’t forget that they’re not laws, they’re just the best way we had to do something at that time.”

Lowenthal said measuring time spent as a “first filter” is a “good start,” but he said the ultimate goal is to “figure out how we reach uniques.” By that, he means, unique media consumers within a medium or across media channels. One of the problems doing that, he said, is the data isn’t available for some big analogue media to do that.

“We spend a lot of money on TV and out-of-home and there’s not a way to do that,” he said.

“I think everyone is struggling with what have been relatively blunt evaluations tools that we been using to develop and analyze various media and the plans we put together,” adds Audrey Siegel, managing partner of sister MDC Partners agency Assembly.

Siegel, who also had not been briefed on the new Telmar product was a little skeptical about its potential value, adding: “What would make an actionable tool is if we could find something beyond a rating point and ge to a more meaningful understanding about what those impressions are, and how they play out with the user/listener/viewer, in terms of their actions. What we’re really trying to do is get to some kind of comprehensive measurement of all screens.” 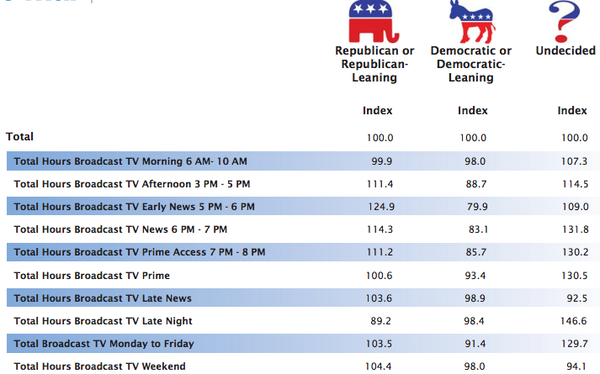