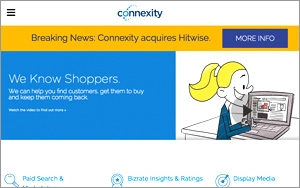 Hitwise will operate as a Connexity division. The terms of the deal were not disclosed.

Bill Glass, Connexity CEO, doesn't expect any layoffs from the acquisition. The combined company will have about 470 employees. "It's a revenue synergy and product innovation play, because the companies are doing very different things," he says.

When asked about the financial impact of the acquisition, Glass says it's "material and will become roughly 30% of net revenue business in the future."

With the acquisition, Connexity gains entrance into Australia as well as AudienceView, a platform that Hitwise initially developed as a profiling tool and released in March 2012, but since redesigned and rereleased about three months ago. Now the audience segmentation and behavioral analytics platform combines offline and online data providing cross-channel analysis to identify demographic and psychographic behavior and patterns by device type, from smartphones to desktop and wearables.

For marketers, the biggest opportunity from this acquisition is the ability to simplify the customer path through a combination of AudienceView’s clickstream and panel-based data with Connexity’s programmatic audience targeting technology. The data should help marketers better understand and identify their target audiences and eventually, in the same interface, activate those audiences and review the effectiveness of the advertising campaigns.

Combining the technology -- which will take between 12 and 18 months -- from both companies clearly improves support for search marketing, both organic and paid, Nigel Wilson, managing director of Hitwise, now a division of Connexity, told Search Marketing Daily. From London, he will continue to run the group as under Connexity as a division.

The technology takes traffic-based data to define an audience, with half of the data coming from mobile devices. For instance, a brand decides wearable technology isn't just for early adopters, but more for consumers ages 40 to 60 wanting to get fit and monitor their lifestyle, it could build an audience segment that would include search terms and engines used by this market segment, along with Web sites visited, and dwell time online.

AudienceView, once fully integrated with Connexity, will allow retailers to compare demographics, preferences and Web behavior of customers that shop at their physical stores to those shopping online, and then use the data to rethink their advertising campaigns, and update media plans. The technology takes traffic-based data to define an audience.

The move in 2014 to expand from a shopping engine to data-driven marketing services led Connexity, formally Shopzilla, to change its name and begin building its cost-per-click platform by acquiring PriceGrabber and Become.com.

The acquisitions expanded its geographic reach to support its CPC listings business, audience modeling platform that scores data and builds audiences, and Connexity's programmatic platform that connects to all of the major ad exchanges to bid and buy programmatic ads.

Today, Simmons and Hitwise run under Experian Consumer Insights. The two business units will continue to operate as a combined entity, though Connexity and Symphony will seek to separate the two properties in 2016.