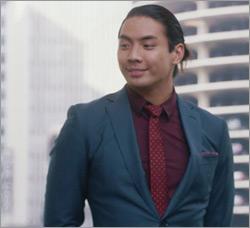 Renaissance Hotels will roll out the red carpet Monday at the Renaissance Chicago Downtown to premiere its first film produced in cooperation with Marriott Content Studio. The content strategy works well for other Marriott brands.

The 12-minute film, “Business Unusual,” written and directed by Daniel Malakai Cabrera and Caine Sinclair, speaks to next-generation travelers to drive new business. The storylines aim to bring viewers a new perspective on typical topics, explains Dan Vinh, VP of marketing for Renaissance Hotels. The film was produced in partnership with Substance Over Hype.

“The film shows how business travelers can identify serendipitous moments that help them discover new approaches to their work,” Vinh says. “This is a way to reach a new audience that may not have heard about all our brands.”

In this particular film the ad executive, David, pitches the client an advertising campaign, cinching the account by emphasizing a new perspective for the company, Albright Glass.

The Content Studio is developing films for entertainment audiences through original storytelling where the brand and the hotel play a character, to ultimately inspire travel. Viewers can catch these original films during airline flights, in hotel rooms, on YouTube and other places worldwide.

The brand also uses paid-search advertising to promote the films for about 60 to 90 days. Some of it ties into Marriott’s major push for search engine optimization and paid-search advertising. The films are also promoted on the hotel’s home page. “It’s not a distribute-and-go-home strategy,” says David Beebe, VP of global creative and content marketing, for Marriott International and its portfolio of 19 brands.

Marriott develops sales packages for each film. The package for “Business Unusual” focuses on unusual places to discover in Chicago. “French Kiss,” which racked up 6 million views on YouTube, included room discounts, and Champaign and chocolates on arrival. The hotel chain uses the data to remarket and retarget site visitors.

Consumers can only access the sales package through the film. The “French Kiss” package drove more than $500,000 in revenue Beebe says. “The films are putting heads in beds,” he says. “We also license the films to other distributors that need content. The funds go back into marketing to support other film.”

Short films are part of Marriott’s marketing and advertising strategy to produce engaging content that builds communities that drives commerce.

“Business Unusual” marks the third original short film produced by the Marriott Content Studio, in just more than a year. The division also released YouTube series, “Hot Shoppe” and “DO NOT DISTURB.” Marriott’s Content Studio publishes, distributes and shares digital content across multiple platforms and on all screens.