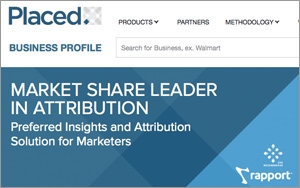 Placed, a location-based in-store attribution company, announced a new tool that will allow marketers to measure the viewability of their out-of-home advertisements, and attribute subsequent foot traffic to those ads.

Placed measures about 600 million latitude/longitude pairs from consumers who have opted into Placed’s location tracking.

Since it can measure lat/longs directly from the device, the company can also measure sensor values from the gyroscope and compass to determine which direction a user is traveling or facing.

By combining those readings with the direction, size and placement data of out of home advertisements, Placed CEO David Shim says he’s able to apply tactics commonly used for measuring the viewability of digital advertisements to out of home.

“We’re bringing the fundamentals of digital advertising and applying them to out-of-home,” says Shim.

As location targeting and OOH advertising converge, Shim says the billboards they measure, “almost act like retargeting for the physical world.”

Shim says that their partners have taken advantage of the product for a little while now, but this is the first time it’s been made available to the public.

“Location is almost like the cookie,” says Shim, referring to the trouble that mobile advertisers often have with the attribution of consumers. Now he says, attribution can extend from desktop to mobile to out-of-home with little friction.