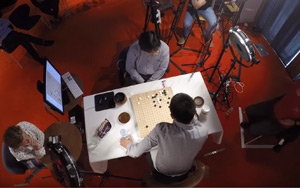 Google took a giant leap forward Wednesday in deep learning and artificial intelligence (AI), showing the world that AlphaGo -- a program developed by its DeepMind subsidiary -- can defeat a legendary Go player Se-dol in the first of five matches that began this week in Seoul, Korea. The move is reminiscent of IBM's Watson on the U.S. game show Jeopardy.

The ancient Chinese game Go requires players to compete with black-and-white checker-like stones on a grid similar to a chess board. Go is viewed as more complex than chess because it has a far greater number of possible options for moves. In chess, the number of possible moves is about 20, whereas in Go, the average possible moves would be about 200, according to DeepMind.

For advertisers, Google's machine win against the human champion shows the complexity and human-like thinking that deep-learning technology and artificial intelligence can bring to the Web and targeted advertising. It also demonstrates the processing power and decision making skills of a machine vs. human.

"They were neck-and-neck for its entirety, in a game filled with complex fighting," Demis Hassabis, founder and CEO at Google DeepMind, wrote in a blog post.

The implications have far-reaching influence on media from search to display and programmatic buying capabilities as well as robotics.

While some may think it's a leap from a machine winning a game against a human to prove out benefits for advertising and marketing strategies, history points to IBM's supercomputer Watson as one example.

In January 2014, after IBM's Watson won against former Jeopardy champions Ken Jennings and Brad Rutter the company invested $1 billion to create a new division called the Watson Group centered on commercializing its Watson supercomputer. At the time IBM said it would seed development with $100 million in venture investments going toward startups and businesses building Watson apps and an ecosystem around the technology.

On Wednesday, IBM and Hilton revealed the test of a hotel concierge robot named Connie based on Watson technology, cognitive learning and AI, so it can understand speech. The robot provides personalized recommendations for travelers such as directions and information on nearby restaurants.

As for the Go matches, the games will pay $1 million in prize money to the winner. If AlphaGo wins, Google will donate the prize money to UNICEF, STEM and Go societies.