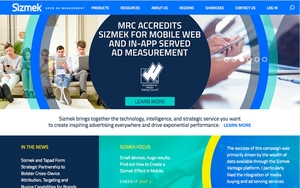 Sizmek has announced that its clients can now execute private marketplace (PMP) programmatic transactions through StrikeAd, a mobile-first programmatic solution.

According to eMarketer, real-time bidding within PMPs is the fastest-growing transaction method for mobile programmatic. While it only accounted for roughly $670 million in ad spend in 2015, by 2017 that spend will grow to $2.86 billion.

“The share of mobile programmatic deals now accounts for 30% on our exchange, with a growing part coming from advanced ad formats like the Parallax or the Video Interstitial,” stated Cyrille Geffray, CEO of Smart AdServer.

Private marketplaces are popular for mobile marketers because they enable marketers to integrate data that will allow them to target more effectively and ensure that their ads are getting premium placement.

However, the reason they have  in popularity is because the open marketplace can be extremely complex. PMPs allow marketers and advertisers to ensure that the ads are served to the right individual through the right publisher.

Some see PMPs as a halfway step before the market can be truly open.

“[PMPs are] a stopgap measure, but a really important one,” says Mike Caprio, global VP and GM of programmatic at Sizmek. “The primary reason for dollars in private programmatic is for the attaching of data. The spend is migrating in a really meaningful way.” For many marketers, PMPs are a simpler alternative.

As more ad dollars shift into mobile, the lack of cookies has made attribution a special challenge for marketers. The fear of buying programmatically without accurate attribution has been a major stumbling block for advertisers in the space — hence, the rise of PMPs.

“We’re not recreating the wheel here. We’ve taken the framework of what’s been built for desktop and modifying it for mobile. We’re hoping that our PMP will encourage agencies and brands to get deeper into mobile,” says Caprio.