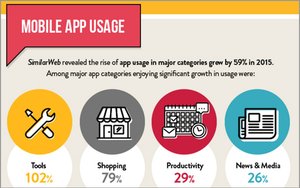 Advertisers are looking for ways to build a longer relationship per search session with consumers. While the shift to mobile has shorted the time to find information, it also lengthens the number of pages visited.

The average time spent via a smartphone on Google's search engine fell by 2.17 seconds, according to data released from SimilarWeb, with help from JBH, and Smart Insights. The report on the state of mobile marketing compares data from December 2014 to February 2015, with December 2015 to February 2016.

Time spent on the Bing search engine fell by nearly 10 seconds. On Yahoo that number rose to more than 21 seconds. The numbers show the challenge of keeping users engaged for the same time as on desktop visits.

Data from SimilarWeb shows that installations for search engine apps also fell between February 2015 and February 2016. Google saw a decrease in installations of 3.6%; Bing fell 11.47%; and Yahoo dropped 1.66%.

The trend toward mobile isn't confined to the Untied States. In the UK, the mobile Web also continues to grow in use. In January 2016, SimilarWeb notes that 65% of the top shopping traffic came from mobile in the UK.