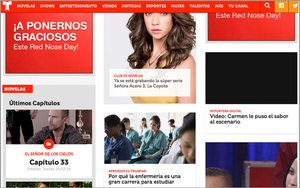 The NBCUniversal Telemundo network is jumping on a new strategy to target a younger audience. It is partnering with popular digital publications that already have a strong millennial following, like Mashable, Vox, Tastemade and Buzzfeed.

During a May 12 pre-upfront press conference in Manhattan, Telemundo said they want to attract what it calls Generation M: mobile, multicultural millennials. That means young, bilingual Hispanic Americans.

According to a Deadline report, Peter Blacker, EVP of digital media and emerging businesses at NBCUniversal Telemundo Enterprises, said at the conference that the digital partnerships will “introduce original opportunities for our [advertiser] clients to connect with the demographic that is driving the U.S. consumer market, spending more than anybody else across major categories.”

Telemundo will partner with Tastemade to create Deli, a food-centric digital and social hub with popular recipes and food-related series in both English and Spanish to target young Hispanic Americans.

Telemundo and Tastemade will also develop “food-centric videos” for Snapchat Stories and other social platforms.

Mashable and Telemundo will expand the network’s El Pulso news and information vertical to include a weekly “Facebook Live” show. The series will focus on the “latest technology social chatter among Latinos and highlight the most viral, unforgettable trends, plus unearth hidden digital treasures from Latin America and the U.S. Latino community.”

Telemundo will launch a mobile, sports-focused site with with Vox’s SB Nation to “fulfill the wants and needs of millennial Hispanic lovers of soccer, mixed martial arts, boxing and more.” To start off the site, editorial content will focus on the FIFA World Cup Qualifiers, Liga MX, NFL and UFC Fight Night. The site will introduce a mix of existing content from SB Nation and Telemundo, as well as new original content.