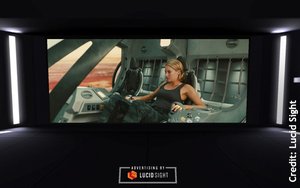 Lucid Sight, a virtual-reality startup, announced that it has raised $3.5 million to develop games and a VR ad platform.

“Ads bring a new revenue stream to independent developers like Lucid Sight,” states Randy Saaf, CEO and co-founder at Lucid Sight. “Many developers will find that they will make more money giving away their game ad supported than selling it.”

According to Lucid Sight, the initial numbers look promising—the company ran a 30-second 360 degree campaign in conjunction with "The Divergent Series: Allegiant" movie, which 30% of consumers chose to watch to completion despite the option to opt-out at 10 seconds.

“Traditional flat advertising on TV, web, or mobile can't convey VR’s sense of immersion, presence, and scale," states Saaf. "The only place to effectively promote a VR experience is within another VR experience."

Freemium games have typically been slow to develop on new platforms because the ad-serving infrastructure takes time to build. When Lucid Sight’s co-founders, Octavio Herrera and Saaf, built their own ad tech for their mobile games, it eventually became AdColony and was bought by Opera for $350 million.

Taking a lesson from their time spent in mobile gaming, which now almost exclusively operates on a freemium model, Herrera and Saaf are looking for a repeat performance in VR, pushing for ad-supported games from the get-go.

Investors in the round include Rana Capital and Salem Partners. Previous funding came from AdColony and Herrera and Saaf. “This capital will allow us to release high-quality and free ad-supported games across all VR platforms at a higher pace,” stated Saaf.