Apple To Use 'Differential Privacy' To Collect Data From iPads, iPhones 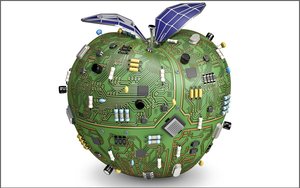 Companies have inconspicuously begun collecting mounds of location and use data from mobile phones through snippets of code embedded in operating systems and beacons in physical stores that send targeted text messages based on online searches or location.

When Apple releases an update to its iOS for iPhone and iPad in fall 2016, it will begin using a technology it calls "differential privacy" to gain insight into user behavior. The effort, per one report, suggests it will allow the company's engineers to "spot patterns on how multiple users are using their devices" and keep up with rivals without violating an individual's privacy.

Craig Federighi, Apple’s SVP of software engineering, told The Wall Street Journal at the company’s recent developer conference that the technology works by adding incorrect information to the data Apple collects. Apple’s algorithms extract useful insights while making it very difficult for anyone to link accurate data back to an individual user.

Apple will use "differential privacy" to keep user data anonymous while analyzing how customers interact with searches, connections through deep links from searches to applications or Web pages on the phone, emojis or new slang expressions.

Beacons also have become a way to inconspicuously collect "anonymized" data. Several search marketers from major brands told Search Marketing Daily they have installed beacons in their physical stores with the ability to tie online browsing to transactions in stores whether or not the individual ops in because it's based on location services.

Although beacons may cost about $5 each, the cost to maintain beacons isn't cheap. Forrester Research estimates advertisers "deploying a location-based service needing 2-meter accuracy for 100,000 square meters (the average size of a big-box store) can expect to incur an annual cost of $240,000 using beacons versus $60,000 using WiFi.

While 3% of companies are using beacons, another 11% are piloting them, per Forrester. Zebra Technologies, which manufactures beacons, recently announced a partnership with Google that allows Chrome to collect the data that the beacon transmits in real time. The individual's smartphone listens to the beacon and talks directly to Google's Chrome browser on any Android or iOS device.