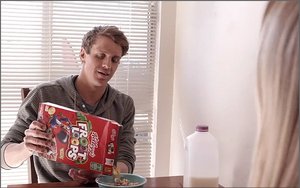 The Battle Creek, Mich., cereal maker created a virtual reality video that shows a day in the life of the Olympic hopeful, starting with a bowl of cereal for breakfast, of course. The video can be viewed using a VR headset or Google Cardboard. On Youtube, it is also available as a navigatable 360 video.

Krispr, a branch of Edelman devoted to Kellogg, is the lead agency on the project with VML on digital.

“Whether you’re a mom getting her kids ready for school, or an elite athlete preparing for competition, we understand that everyone awakes in the morning with a personal motivation to get them started,” Shripka tells Marketing Daily. “We’re seeing great engagement with fans and expect things to really ramp up the closer we get to the opening ceremony.”

The video is part of Kellogg’s "What Gets You Started?" campaign, which features other online videos highlighting athletes and their preparation for the games. Other athletes featured include Simone Biles (gymnastics), Julie Johnston (soccer), Ajee Wilson (800 meters) and Natalie Bieule (Paralympics discus). In addition to these first-time Olympic and Paralympic hopefuls, Olympic swimming legend Dara Torres will serve as team captain.

In videos, social media and on Kellogg's cereal boxes, Team Kellogg's athletes will share the stories of what gets them started each day as they drive to make Team USA, with the hope of connecting with and motivating fans from every walk of life.

All of the "What Gets You Started?" stories and the VR experience can be viewed at www.youtube.com/KelloggsUS and www.Kelloggs.com/TeamUSA. Using #GetsMeStarted, the athletes will continue the conversation on social media throughout the lead-up to the games.