As Audience Reach Erodes, Some Networks -- Mainly Cable And CBS -- Fare Better Than Others 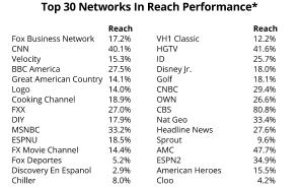 As advertisers and agencies wrap up their 2016-17 upfront negotiations, they might want to consider an analysis released this morning by an influential Wall Street analyst reviewing changes in the U.S. audience reach of Nielsen-rated TV networks. While ratings continue to serve as the currency that are the basis of most TV advertising deals, big TV advertisers still utilize media plans that seek to optimize the reach of viewers in the TV universe.

“While ratings tend to generate the bulk of focus in the press and among investors, reach metrics are often comparably important to the industry,” Pivotal Research Group analyst Brian Wieser writes in an analysis released this morning showing the rankings of 79 Nielsen-rated TV networks on the basis of their reach performance over the past 12 months.

While most networks continued to lose reach due to the hyper-fragmentation of the media marketplace, some performed better than others on a relative basis. The analysis shows how each of the networks performed utilizing a simple average of the change in reach in the 12 months through June 2016.

While the major broadcast networks continue to deliver the greatest reach -- by a wide margin -- over their next-closest cable competitors, Wieser notes that "a handful of cable networks -- specifically TBS, TNT, FX, USA and AMX -- stand apart from the pack of cable networks given the broad appeal of the programming each runs, although monthly reach remains only around 50% for them."

“There has been some erosion in reach over the past year of around 1.6%, although CBS has lost less relative to ABC, NBC and Fox,” Wieser notes, adding that with the exception of AMC, the broad appeal cable networks -- TBS, TNT, FX and USA -- all experienced significant losses of reach that were worse than industry averages.