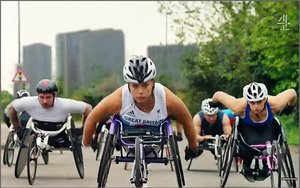 I’ll take the outside view that one of the reasons the Olympics viewership was down is that particularly this year, the idea that there are “heroes” seems so naive. (Cue the Ryan Lochte footage.)

But ever since ABC Sports president Roone Arledge coined the phrase “up close and personal,” back when that network revolutionized Olympics coverage during the 1960s, the Games have been all about beds of heroic music, slo-mo footage and make-America-cry video vignettes.

It’s not surprising that the most popular Olympic Games commercials carry on that tradition.

Unruly, the ad tech firm that has made a business out of marking how ads are shared on social media, and instructing clients how to do it efficiently, has issued its list of the most shared commercials for the Rio games.

Unlike lists about the Super Bowl, there are no commercials that elicit a laugh.

These Olympic ads are mostly tear-jerkers but really, I feel honored to be manipulated so artfully.

The most shared ads from these games, with links, are below.

The list of top shared Olympics ads, ever, includes only a few from these Rio games:

The rest on the Rio list are of the inspirational variety. P&G’s “Thank You Mom” is the latest in a series that ties together super-achieving kids and and super-supportive moms. You could never guess this sells Tide.

But to the extent anything is being sharing from these Olympics, look to Great Britain, where Channel 4’s extended promo for its later Paralympics coverage has been shared nearly 1.5 million times. It deserves all the attention it’s getting.\

The promo shows quick and not-cliched views of handicapped athletes--and the handicapped musicians playing the music in the spot. It is, in the way Brits always refer to things like this, “brilliant.”

Unruly’s research says Olympics ads are almost twice as likely to make viewers feel inspired, and 166% times as likely to feel proud than an average ad. They are 75% more likely to make a viewer feel “intensely exhilarated.” Right there in the living room!

But as noted, they’re only half as likely to make you laugh, which, to me, would be a telling opening in the market: Make viewers chortle during the Olympics. That’s a worthy goal. I’m as gobsmacked by athletic competition as the next person, but man, those telecasts packed a whole lot of nobility into a couple of weeks. Some little laughs would be a good thing.

Unruly research seems to indicate that even at a time when people seem to be down on heroes, and even their own countries, they’re 46% more likely to share an ad just to be part of the feel good/patriotic zeitgeist. In a way, that seems to say there is still something to wave the flag about.