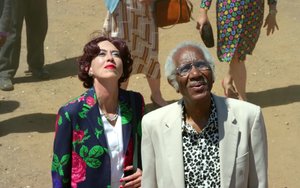 When it comes to digital smarts, Nordstrom, Macy’s, Kohl’s and JC Penney rank at the Genius Level, according to the latest report from think tank L2. But while the industry as a whole is getting sharper, now spending 52% of digital ad budgets on mobile and maximizing customer engagement on Instagram, stores are still no match for the Amazon onslaught.

“Only five years ago, Macy’s apparel and accessories sales were five times that of Amazon, providing a wide lead in a logistically challenging product category that features a high exchange rate,” the new ranking says. “By next year, Wall Street analysts estimate that Amazon will overtake Macy’s as the largest U.S. retailer of apparel and accessories, with sales of $28 billion in the category.”

But Amazon isn’t the only problem. Department stores are also challenged by the fast-fashion wizardry of brands like H&M, Zara and Uniqlo, as well as companies like Coach and Michael Kors cutting back on department-store distribution. “With key partnerships that help differentiate the customer shopping experience under threat, the historical outperformance of department stores versus the S&P 500 has evaporated over the last 18 months,” it says.

The company ranks retailers’ digital IQ by looking at four key areas: Its site and e-commerce skills, digital marketing, social media and mobile strategies. Only four reached what L2 considers genius level, with a combined score of 140 or above. The remainder of the top 10 scored at what it calls the “gifted” level, including ASOS, Bloomingdale’s, Marks & Spencer, Neiman Marcus, Saks Fifth Avenue and Sears.

It notes that most retailers are scrambling to keep pace with the bar set by Amazon Prime, with 69% offering next-day shipping, up from 58% last year, while 27% are now offering same-day delivery, compared with 15% in last year’s report.

L2 says retailers are now devoting 52% of their digital budgets to mobile in the U.S. But while smartphones were responsible for 45% of web shopping traffic in the first quarter of 2016, on par with desktops, the report says conversion continues to be a major hurdle, with 90% of those adding an item to mobile shopping cart bailing out before buying.

It also says Instagram users are considerably more open to what brands have to say on that platform, with 50% of users following brands. “Not all brands are benefiting equally on the platform,” it says, “with the top seven brands in terms of engagement capturing 77% of total Index brand interactions over the past year.”

Further, a third of Instagram users made purchases on their phone, which makes them 70% more likely to do so than non-Instagram users.