Sorrell: Facebook May Be WPP's No. 2 Supplier Next Year 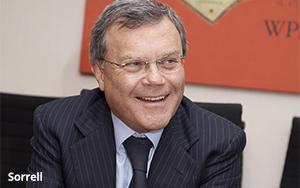 Facebook may have issues with measurement, but they don’t appear to be hampering the social media giant’s advertising growth. WPP CEO Martin Sorrell told a gathering at the UBS conference in New York today that Facebook may become the holding company’s second biggest media supplier next year behind Google.

This year, Sorrell told the UBS Conference crowd, WPP will spend some $5.5 billion on Google on behalf of its clients -- up from $4 billion a year ago. The holding company will spend about $1.75 billion with Facebook this year, making it the third-largest media supplier for the ad giant in 2016. Sandwiched in between at the number two spot collectively are the Murdoch-controlled properties including News Corp. and Twenty-First Century Fox.

“The power of search is phenomenal,” Sorrell said, referring to Google, which along with Facebook accounts for about 75% of digital spending.

That’s a lot of media power concentrated in just two entities, Sorrell said. “We do need a third force,” he added, suggesting that Snapchat -- which recently filed an IPO with projected revenues of $1 billion next year -- is a potential candidate. WPP spent $70 million with Snapchat this year.

Sorrell also suggested that “traditional media” could benefit itself and the industry by putting together a “third force” to bolster its own digital position and serve as a counterweight to Google and Facebook.

As to the ad economy generally, Sorrell said the outlook for 2017 is similar to 2016, with both GDP and advertising expected to grow a middling 3%-plus. “Everything is not wonderful,” he said. With low GDP, low inflation and therefore little pricing power, marketers remain focused on costs.

The impact of Donald Trump’s presidential election victory is hard to assess at this point, the WPP chief said. “My bet,” he said, is that the real estate mogul’s election “will be better for the U.S. economy than people thought.” The long-term impact is hard to predict, he said, adding that “Trump is good for business in the short to medium term.”

That said, there’s a lot of uncertainty in other markets. Trump has already stirred up the Chinese with his conversation last week with Taiwan’s president. If the U.S.-China relationship degenerates, “that doesn’t bode well” for the global economy, he said.

And while the Brexit impact has been limited so far, “next year it could be quite strong,” Sorrell added, also noting uncertainties in Italy and France.

A trend that marketers must consider in the future he said is the continuing growth of the global Muslim population, expected to become the world’s single biggest religious group in little more than a decade. “The development of local tastes will become more and more important,” he said.

Touching on the company’s focus to integrate its offerings—which it calls “horizontality”—Sorrell said that it is driven by the fact that “clients want one point of contact.” They also want a “less complex” offering that is “simple in terms of execution.”