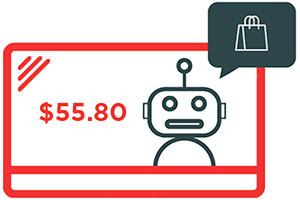 More than one in three Americans (37%) are willing to make a purchase through a chatbot, spending an average of $55.80 per purchase, according to a new report from Publicis Groupe’s DigitasLBi. A chatbot is defined as computer software that can interact conversationally via text messages to solve simple, quick response requests from consumers for product information and to make online purchases.

But many consumers seem willing to interact with chatbots if they benefit from the exchange. Nearly six in 10 (59%) have or would be willing to communicate with chatbots to either receive offers and coupons, receive recommendations or advice (37%), and/or conduct online banking (14%). Nearly half of Millennials are open to recommendations from chatbots.

It's critical to make a good first impression. Nearly three-quarters of Americans (73%) reveal that they would likely not use a company’s chatbot again after having a bad experience with it. They also realize that they are not real people. Six in 10 who say they have interacted with a chatbot said they knew they were communicating with one because of the robotic and artificial nature of the responses.

Brands should allow consumers to opt out of sharing personal data. Affluent households with income over $100K are more likely than less affluent Americans whose total household income is under $50K to find it invasive that chatbots can remember past interactions and store a customer’s previous purchase history and personal preferences (28% vs. 20%). People living in the Northeast are more likely than the other regions of the U.S. to find them invasive (31% in the Northeast vs. 23% in the South, 19% in the Midwest, and 22% in the West).

"Smartphone users want fewer apps doing more work, and chatbots are one way of making that possible,” says Jill Sherman, SVP, social strategy, DigitasLBi. “But for retailers to benefit from the bot opportunity, they need to convince consumers that commerce through a chat interface — instead of a traditional Web site or app — is as easy as texting a friend, but with more perks. Think personal assistant, concierge, or VIP service. Something that guides a person to the right product or service. The clearer the benefit to the consumer, the straighter the path to adoption."