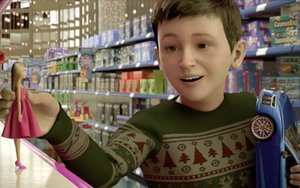 The campaign sets out to stop gender-based differentiation and remind everyone that play influences learning and children’s future choice of career and interests.

Developed with agency Proximity Barcelona and studio Post23, the social campaign centers around the Spanish-language "The Doll That Chose To Drive" animated 3D-film. It stars a doll who decides to cross the chasm to reach the toy cars and break with convention by driving an Audi R8 for the first time.

The initiative is Audi's "way of helping to promote a more egalitarian social model this Christmas, starting with boys and girls, tomorrow’s drivers," stated Ignacio Gonzalez, director of communication and RREE, Audi Spain.

The video appears via TV, movie theaters, as well as on YouTube and social media.

Viewers are encouraged to visit the website with additional campaign components, such as information about secondary characters like the Pony and a hot rod race car, bonus outtakes and printable coloring pages, as well as learn more about gender equality.

People can spread the awareness through the hashtag #CambiemosElJuego (Let’s change the game). Already, the clip garnered more than 1 million views in three days.

In addition, Audi has produced 500 limited-edition versions of the car and doll. People enter to win one of the toys by tweeting about this campaign via their social media accounts. The agency is currently evaluating whether to produce additional quantities, due to the unexpected high demand.

Proximity Barcelona has worked with Audi for 17 years. They previously collaborated on the Toy Service campaign that repaired broken or damaged toys.