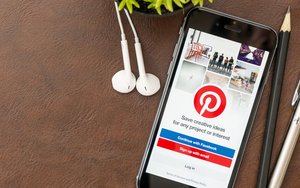 Pinterest has been working to become "the world's catalog of ideas" where site visitors can search and share inspiration on everything from home designs to gourmet recipes. It has become the search platform of choice for many who are looking for a muse, attracting site visitors from mature platforms like Facebook.

This one-to-one targeting -- where images index in Google and Bing to draw in site visitors based on keywords -- isn't new, of course. It has been going on for some time, but Web and social sites are required to attract and gain visitors to build on the number of page views and shares, which fuels targeting for advertising and marketing.

The number of users on Pinterest continues to grow at a steady clip -- in fact, much faster than eMarketer expected. Pinterest is growing the number of visitors on its site who are clicking and sharing content.

eMarketer estimates that Pinterest will grow 9.2% this year to reach 69.0 million U.S. users versus. the 58.1 million that eMarketer projected in August 2016. Last year Pinterest's estimated U.S. user base sat at 63.2 million.

eMarketer's forecast suggests that this year, Pinterest will gain ground with every age group. The group with the most users in the U.S. is adults ages 35 to 44, representing 22.1% of all Pinterest users.

eMarketer principal analyst Debra Aho Williamson said in a statement that the demographic between the ages of 25 and 44 remains the sweet spot for Pinterest, but the number of teens on the service is also expected to rise this year. Its U.S. audience is still dominated by females, but there are growing numbers of male users as well.

Estimates for use in the U.S. remain unchanged since eMarketer's last forecast. In 2017, the firm estimates, about 171.4 million people in the U.S. will use Facebook -- up 2.7% compared with last year.

About 150 million people in the U.S. will access Facebook via a smartphone in 2017, while 79.2 million will do so via a desktop or laptop, according to eMarketer.

Page views on Facebook continue to decline, however, according to Hitwise, a Connexity company.

"Some of this year-on-year decline could be the shift to app use, and some, a shift of the younger audiences to new social platforms," Giles Longhurst, SVP and GM or Hitwise Audience Solutions, told Search Blog.

It also worth noting that Hitwise measures all browser-based activity to Facebook, but not app traffic.

This column was originally published in Search Blog on February 1, 2017.