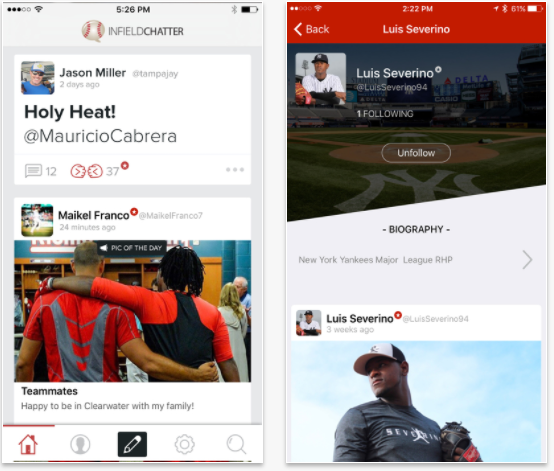 The Major League Baseball Players Association, working with Internet helpers, has launched Infield Chatter, a social media app that lets players interact with fans. Infield Chatter already has more than 1,000 players on board.

It also promises behind-the-scenes video of the boys at work and at home.

The idea, if it works, meshes well with Major League Baseball’s own initiatives to create youth appeal for a sport that is certain it is losing younger fans, who usually like things, including communication, to move quickly.

Creating tighter bonds with players should help relatability, but MLB apparently has no part of Infield Chatter — except paying its most famous members/contributors and giving them something to talk about.

The mobile social app, available for Apple and Android, has been going through its beta testing, appropriately, during spring training. CNN Money reports  players announced a similar venture, identically titled, in 2015. It never went anywhere then, but it helped inform the new one.

Most players with social accounts add mainly pleasant, innocuous remarks. Every so often (though not often among baseball pros) players make comments that are, well, way off-base. One would assume that won’t happen here.

So it has attached Infield Chatter to other entities that will help. The site is hosted on the Honeycommb mobile platform with “tools and features” most social sites don’t have. (Here’s an odd pairing: It does the same thing for a social site for Lady Gaga.) Infield Chatter is also working with Lineage Interactive, which is in the business of helping brands, athletes and musicians develop online identities.

Still, by the players and for the fans seems to be a sizzling combination.

It’s working out well for The Players Tribune, which purports to be the voice for 1,200 athletes of all sorts. It was founded by Derek Jeter and Kobe Bryant in 2014 and has raised $58 million in funding, including some from athletes themselves. Fortune reported it has 100 million content views a month; it will use the latest pile of money to do more video.

The idea Infield Chatter appeals to me. It serves a distinct, pinpointed community in ways other social media don’t, at least without some work.

It would be impossible to say athletes don’t get enough outlets, but there’s a kind of walled (fenced?) garden aspect to Infield Chatter that should be interesting, maybe even somewhat personal.

At launch, those 1,000 contributors would mean nearly all the players on Major League Baseball’s 40-man rosters for each of its 30 teams are signed on. (MLBPA says about 500 major leaguers are on the site, but minor leaguers and retired players can also contribute.)