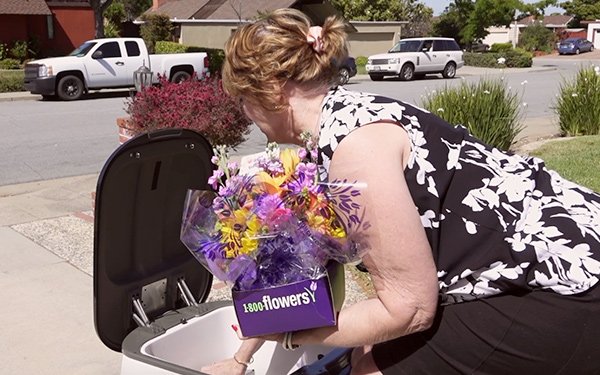 Some consumers may be geting a Mother’s Day surprise, as gifted flowers arrive inside a robot.

The nearly two-foot high robots travel around four miles an hour and already have delivered food and pizza in Germany, cupcakes in California and have roamed the streets of London.

Now, 1-800-Flowers.com is using the robots from Starship Technologies to deliver flowers, just in time for Mother’s Day.

The California trial started with its first delivery in Sunnyvale on Wednesday, which was also the first time the robot’s audio capabilities were used, so music started playing as soon as the flower recipient opened the top of the robot to receive her flowers.

The trial just started Wednesday and the deliveries are going one at a time as both 1-800-Flowers and Starship Technologies learn and fine tune the program.

“We have had two successful deliveries to two lucky moms in Sunnyvale,” McCann told me. “The companies are still working through the logistics and details in terms of the number of robotic deliveries.”

This is hardly the first leading-edge technological innovation the online retailer has been involved in around Mother’s Day, the Super Bowl of florists.

McCann said the company is excited to test robotic deliveries as an emerging delivery technology and learn how customers respond to the new capability.

The floral arrangement and other gifts are loaded into the robot at the florist and when the robot arrives, the recipient unlocks the cover via mobile app to open it.

For obstacle detection, the 6-wheeled droid uses nine cameras and ultrasonic sensors. The devices can travel up to 10 miles an hour, but generally is set to travel at four miles an hour, and runs primarily on sidewalks.

The success metrics are still to be determined, since the pilot just launched this week, said McCann.

For any recipients of flowers unexpectedly delivered by a robot in Sunnyvale this Mother’s Day, one of those early metrics is likely to be a customer’s big smile.

Innovations of 1-800-Flowers.com will be presented at the MediaPost IoT Marketing Forum May 18 in New York. Here’s the agenda.