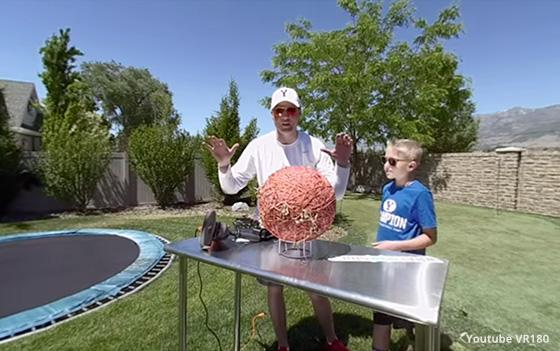 YouTube CEO Susan Wojcicki unveiled several new features at VidCon Thursday such as the ability to search, share content, and work in virtual reality. The new cinematic VR format, VR180 -- a collaboration with engineers from Google's Daydream VR division -- that will be made possible through a new line of cameras from Yi, Lenovo, and LG.

Exemplifying the shift of dollars from TV to online video, this year's VidCon YouTube keynote played out like a choreographed talk show in the YouTube Arena at the Anaheim Convention Center, hosted by Rhett & Link from Good Mythical Morning, a comic duo with several YouTube channels and a combined subscriber base of more than 20 million.

Wojcicki, their first guest, ran through the announcements and stats to tout YouTube's continued growth such as: 1.5 billion logged-in users come to YouTube each month worldwide and viewers watch more than an hour a day on mobile devices, compared with four hours per day on the television in the U.S. YouTube's fastest-growing audience is those who watch content on the TV screen. In fact, the company has seen 90% year-on-year growth.

Wojcicki also announced several redesigned features on the desktop and on the mobile platform such as the ability to share content without copying, cutting and pasting the URL. On mobile, for example, videos will now automatically adjust to the screen. Live streaming will also become easier. The number of live streams in the past year has increased fourfold, she said.

All the original content -- about 40 shows -- now is available on YouTube TV and Red video service. The company is also working on a new series expected this summer called "Step Up," a 10-episode drama that takes place in a performing arts school, produced by Channing Tatum.