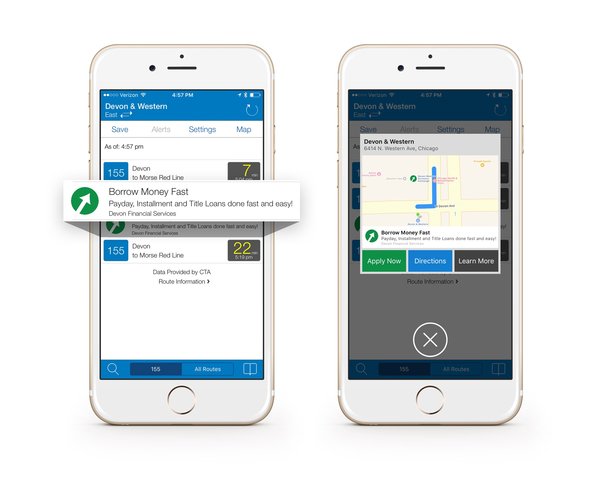 A Chicago-based mobile ad network that specializes in location-based targeting and transit apps has launched native advertising capabilities. CommuteStream said native ads can be displayed in a variety of formats according to each app's form and function.

When users click on the ad, they’re greeted with a pop-up "action card" where an advertiser can communicate an offer. Up to three calls to action can be displayed beneath the offer while people remain in the app.

CommuteStream partners with market-specific transit and tracker apps like Transit Stop, an app that enables commuters to get around Chicago, along with Routesy (San Francisco), MyTransit (New York), and TransitTracker (Los Angeles).

As an ad network, the company receives information about how people are using these apps, and pulls in location data from the phone when it’s available. The core of what CommuteStream does is inferred by how people are using the apps. Over time, the system can get an understanding of an individual’s daily commute, the train or bus stops they’re using, time of day they traveling, etc. That data is used  to target commuters with relevant ads and offers.

“We’ve been working on native [advertising capabilities] for more than a year,” said Sam Pro, CEO and co-founder, CommuteStream. Pro said the goal is to enable businesses to advertise their physical proximity to different parts of the transit system. The stop-based native ads enable advertisers to place their ads and offers in close proximity to transit stops. Brands and businesses can display an ad or offer in that stop.

“What makes it native is the fact that we work with individual publishers to integrate the ads in a way that’s appropriate. With native, we really need to engage the publisher to think about what’s appropriate and meaningful in terms of ad placement,” Pro said.

The ads consist of a headline, logo, and location name. From there, it’s up to the publisher to decide what gets added. For example, a publisher might view a list of all the stops on a train line, then choose to display just the brand logo next to the stop for brand reinforcement. Then when a commuter clicks on the stop, the publisher can add a headline and an offer.

While the ads are static, it’s possible to place a video component in the secondary call to action.

Advertisers can have three customizable calls to action -- which can include directions to the advertiser’s location, a mobile website, and an offer page.

So what role does native advertising play in location-based targeting? “We can capitalize on the fact that the apps we partner with represent things in the real world. Every app we partner with, there’s a way to work in the transit system,” Pro said. “We allow businesses to create an association of their physical proximity with those parts of the transit system.” 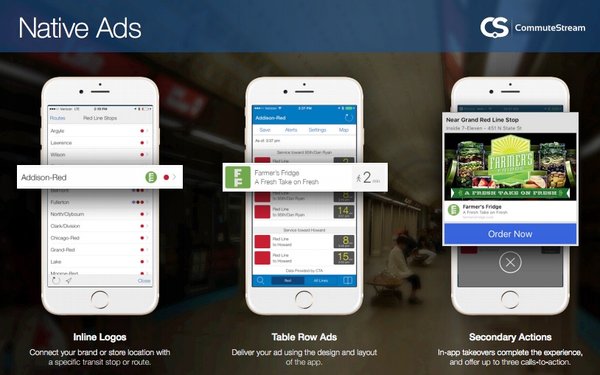