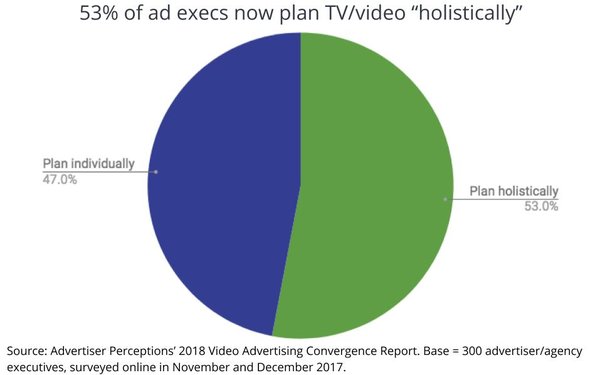 As 2018-19 upfront and/or newfront negotiations heat up, it’s more than likely that those deals will be executed as separate, nonintegrated teams. While a slight majority -- 53% -- of advertiser and agency executives say they now plan TV/video as one “holistic” medium, they don’t necessarily execute it that way, according to findings of Advertiser Perceptions 2018 Video Advertising Convergence Report.

The report finds that only 40% of ad execs say they actually buy TV and video as part of an integrated team.

Among the 60% who currently buy TV and digital separately, 83% plan to eventually integrate their teams, while 17% have no such plans.

The report suggests that the issue isn’t just one of legacy advertiser and or agency organizations, but that the supply chain is also a significant factor impeding a more integrated approach on the “demand-side.”

Respondents indicated that "siloed sales organizations" among suppliers is a big “challenge” for advertising and media-buying organizations.

"The methods of purchasing these campaigns over larger networks is very complex," said one anonymous marketing director, noting, "there is no single platform that can be used to target the majority of the video outlets, so setting up the campaigns is time-consuming and confusing." 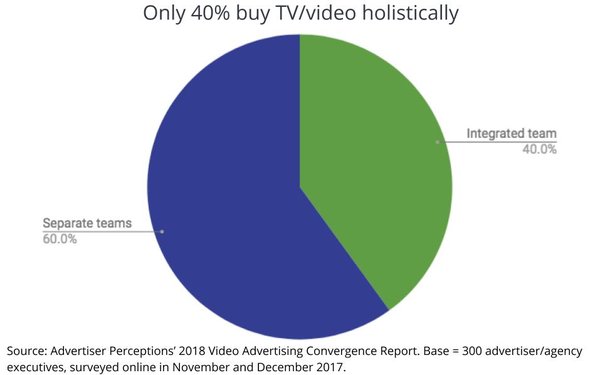