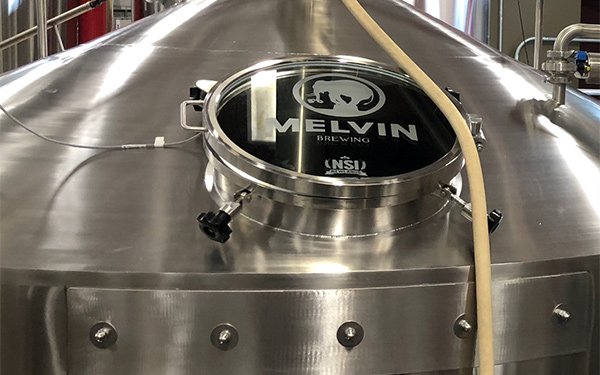 What's in a name? Everything according to Melvin Brewing Founder Jeremy Tofte. For starters, consider the name of the brewery and one of its top IPAs, Melvin, a variant of a wedgie.

Names remain one way that the company forms relationships with customers. Tofte tries to keep everything to two syllables. “Many times we use funny names like 2by4,” he said. “When you drink too many beers it may feel like you got hit with a 2 by 4 in the morning.”

There’s also a beer named Chuck Morris, which sounds like Chunk Norris. The Chuck Morris beer is named after an employee who, while brewing the beer, put in four pounds of hops rather than 4 ounces. Every beer name from the Alpine location has a story behind it, he said.

Melvin keeps about 12 beers in production, but the company has brewed hundreds in the past years. Other names include Ruckus and Heyzeus.

Naming the beers has become a team effort, whereas in years past the brewer decided the name. In the future, some names might originate from the brewery’s customers, Tofte said.

Melvin Brewing does appear in search directors such as TripAdvisor, but marketing is typically done by word of mouth. There’s a small billboard heading north on Highway 89 around Etna, Wyoming, about nine miles from the Alpine brewery. On occasion the company also hosts marketing parties, he said. As of today there has been no online advertising such as search or even mobile messaging, but as the company grows that may change, he said.

In addition to the Melvin brewery located in Alpine, there are pubs with restaurants in several towns. Tofte named the Jackson, Wyoming location Thai Me Up. The name came from a brainstorming session with his dad, who worked for distributors such as Miller Brewing Company and Hamm’s Brewing.

"I was brewing during the day and bartending at night,” he said. “At the time it was basically our friends who came into the pub. They would ask for a Melvin, and we’d say 'are you sure you want a Melvin?' It was funny. Now we’re a large brewery with a funny name."

The location, still open today, serves Thai food and IPAs. In fact it all began in September of 2000 in Jackson in the 180-square-foot back room of the restaurant. After a few years, Tofte even tried to sell the place after failing to acquire a liquor license after several attempts. He sold it on eBay in July 2006 to surf in exotic locales, only to take it back two years later because of extenuating circumstances.

The dream led Tofte to a location in Bellingham, Washington. He named it Melvin Brewpub. Another location is scheduled to open in San Diego, California, some time in October.

The Alpine brewery has a pretty good story behind it. Tofte worked with the city of Alpine and the state of Wyoming to build the facility on the edge of the Palisades Reservoir. The state had a project that allowed businesses to apply for a $3 million grant.

The application process took about a year. Of the $3 million, Melvin would pay back $2.4 million during the next 15 years. The funds go back to the town of Alpine.

As part of the grant, Melvin needed to create 24 jobs for local residents within five years. The brewery created 45 jobs in two years and another 10 out-of-state jobs.