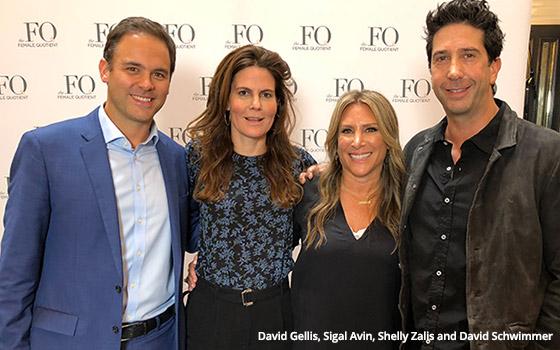 Although actor David Schwimmer's #ThatsHarassment is nearly two years old, the videos, created by director Sigal Avin, and the Ad Council, have seen a spike in views in the aftermath of Supreme Court nominee Brett Kavanaugh's confirmation hearing.

Schwimmer was joined by his longtime friend and #ThatsHarassment partner and writer-director Avin during a splinter Girl's Lounge session that took place at the Sugar Factory across the street from the Advertising Week venue in New York.

This issue remains prevalent, said Schwimmer. Indeed, after first becoming an Israeli viral sensation, the films were revised for America in April 2017, premiering with Cosmopolitan and Esquire magazines.

Then due to the heightened awareness of the subject in the aftermath of the Harvey Weinstein scandal, the Ad Council collaborated with Schwimmer and Avin and nationally distributed 30-second cut-downs of three of the six original films to media outlets nationwide.

Schwimmer emphasized the importance of showing the "grey areas of sexual harassment," since most instances are somewhat uncertain. Added Avin: “We wanted to capture that moment when women feel the line has been crossed but people can still say you are crazy. It becomes much more grounded.”

Looking forward, both panelists asserted that most people still don't know what to do. They hope to connect to bring men into the conversation. “Now we all take responsibility,” they said.

Schwimmer wants to change the mentality that "men are in the trenches together" as brothers in arms. "There is this romanticized fraternity culture. Bros before hos," he said.

“We have been trying to do something that brings what is happening in the college landscape to the corporate world by advocating to become a good bystander. If you see a brother or two take a young woman who is intoxicated and bring her upstairs, step in. Be the guy who is a good positive bystander.”

That now applies to the corporate world, said Schwimmer, noting the importance of anonymous reporting to help bolster cases of harassment.

There are early discussions with the Ad Council about developing additional films to add to the current series. In addition, the New York City Mayor’s Office of Media and Entertainment aired #ThatsHarassment PSAs on Taxi TV, bringing the campaign to video screens in 13,000 NYC taxicabs and generating thousands of impressions per day.

The campaign is also encouraging employers to use the films for training to proactively address and prevent sexual harassment in the workplace. A digital toolkit can be accessed here.